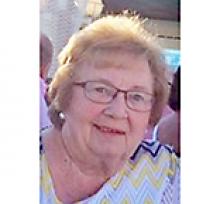 FONDA MORA SMELTZ Fonda Mora Smeltz, of Winnipeg, Manitoba, passed away on Friday, February 23, 2018 in Lake Havasu City, Arizona at 74 years of age. She is lovingly remembered by her husband of 52 years, Dale, two children, Deanna (Jamil Nazarali) of Summit, NJ and Clayton (Trudy) of Niverville, MB, and five grandchildren, Mila and Jemma; Joshua, Ryan and Cameron; Her sisters-in-law Phyllis Forsyth, Carol Forsyth and Karen (Glen) McKinnon, many beloved nieces, nephews, cousins, and dear family friends also survive her. Fonda was born May 12, 1943 in Vernon, BC where her parents, John and Mora Forsyth, were stationed during the Second World War. Following the war, they returned home to Reston where Fonda was raised along with her two brothers, Jackie and Jimmy. She participated in 4-H and figure skating, and attended Reston Collegiate. She then obtained her R.N. degree from the Winnipeg General Hospital. Following graduation she worked as the Virden and District Public Health Nurse. In 1965, she married Dale and they built a home and life on the farm in the Hillview District. They lived and worked there until 2004 when they moved to Winnipeg and remained there through their retirement. Fonda spent her life raising her family, working as a farm wife and an enthusiastic community volunteer. She served on the Fort la Bosse School Board and was involved with the Reston United Church Women and the Reston Fun Fair. She enjoyed puzzles, knitting, playing cards with friends, and collecting junk. She spent many happy times camping at Oak Lake, Clear Lake and Lake Winnipeg. She was a competitive ball player in her younger years, a curler in her middle years, and a huge curling fan in her later years. She hated computers and snakes. She was very actively involved as a political volunteer both in Reston and in Winnipeg. In retirement, she and Dale appreciated spending time in Ft. Myers, FL and more recently the last several winters in Lake Havasu City, AZ where they enjoyed socializing with a large circle of family and new friends. They also enjoyed travelling and playing golf. She was a warm hostess and always had time for a visit or a coffee or a treat. She hosted many large family gatherings and all were welcome. Her greatest pleasure was spending time with her grandchildren; she never forgot a birthday or holiday and took great pride in all their accomplishments and laughed at all their misadventures. We loved her very much and she will be deeply missed. A memorial service will be held at a later date in Reston, Manitoba. In lieu of flowers, memorial donations may be made in memory of Fonda to the Reston United Church (her lifelong church), Manitoba Lung Association (her favourite charity), Mood Disorders Association of Manitoba (Dale's favourite charity), or any charity of your choice. Fonda's family would like to thank everyone for the many acts of kindness, compassion and support expressed during this difficult time. Arrangements were placed in the care of Lietz-Fraze Funeral Home in Lake Havasu and Carscadden Funeral Chapel in Virden. Thoughts and condolences can be made to the family at www.lietz-frazefuneralhome.com or www.carscaddenfuneralchapel.com