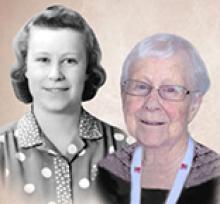 GERTRUDE LOUISE BERRY (née PAYNTER) August 24, 1920 - January 27, 2019 The small hands that sewed, knit and made exquisite needlepoint and cross-stitch are stilled. Gertrude passed away on Sunday, January 27, 2019 at the age of 98 years. She was predeceased by her parents, Roy and Mae; four siblings, and her husband, Harvey. Left to cherish her memory are daughters: Noreen (David) Maguire; Beryl Maguire; Bonnie (Randy Marchinko); former son-in-law Larry Maguire; grandchildren: Wade (Dinh) Bo-Maguire; Shane (Gayle) Maguire; Tim (Barbie) Maguire; Laura (Devin) Harrington; Paul (Lily) Marchinko; Elan Marchinko (Jeff Schachter), and great-grandchildren: Colton; Ashton; Emily; Shamus; Sophie; Kai; Lennon; Mhairi; Oscar; Henry; Ivy; Samara; Scarlett; many nieces and nephews; one cousin, Lois, and constant feline companion, Foxy. Gertrude was born in Tantallon, SK. She graduated from Dominion Business College in Winnipeg and worked for Bill Hanks at the Manitoba Weekly Newspapers. In Flin Flon, MB, she worked for Hudson Bay Mining and Smelting and the Daily Reminder Newspaper as a bookkeeper and layout artist. She and Harvey retired to Souris, then Brandon. Gertrude moved back to Winnipeg after Harvey's passing. Gertrude was a very competitive curler and viewed curling and baseball to the end. She was a member of the Ross Lake Curling Club in Flin Flon and the Souris Curling Club. She served as president of the Ross Lake Curling Club and the Northern Curling District. She was a member of the Rebekah Lodge in Flin Flon and Souris and St. Andrew's Presbyterian Church in Flin Flon. She also enjoyed cross-country skiing, berry picking and camping. Her last trip to Blue Lake, ON in 2018 included a swim! She loved to travel and was able to attend the World Curling in Switzerland and go on a train/bus tour of the Qu'Appelle Valley at the age of 97; where tour guide, Rob Adair, rerouted the bus through Tantallon just for her. Thank you to the many home care workers and the staff of Sturgeon Creek II for loving her. Thank you to Joan Bruce and Linda MacDiarmid for all the visits to Gertrude. A graveside service will be held in Brandon in the summer. In lieu of flowers, donations may be made to the Rick Hansen Foundation, 300-3820 Cessna Dr., Richmond, BC V7B 0A2 or www.rickhansen.com or a charity of your choice. Arrangements are in care of Brockie Donovan Funeral & Cremation Services - (204)-727-0694 Messages of condolence may be placed at www.brockiedonovan.com