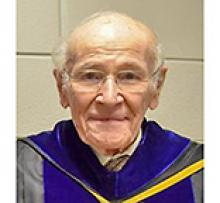 It is with great sadness that we announce that our beloved husband, father, grandfather and great-grandfather, Harold (Jack) Perkins, passed away on July 26, 2019. Born in London, Ontario on July 6, 1930, Dad accomplished a great deal in his 89 years of life.
He earned Honours Bachelors and Masters degrees in Chemistry from the University of British Columbia, followed by a Doctorate in Biochemistry from Iowa State University. He started his career as a Research Biochemist for Agriculture Canada in Lethbridge, Alberta. In 1963, he became an Associate Professor of Biochemistry at the State University of New York (SUNY) in Plattsburgh. Over the next 14 years at SUNY Plattsburgh, he was a Professor and Chairperson of the Faculty of Science and Mathematics, Dean of the Faculty of Science and Mathematics, and Dean of Graduate Studies and Research.
In 1977, Dad was hired as the President of Brandon University, in Brandon, Manitoba. During his time at Brandon University, Dad was instrumental in creating the Brandon University Foundation - the charitable arm of BU that today stewards more than $65 million in endowments and other assets, and which has disbursed more than $55 million to Brandon University to support scholarship, research and the improvement of university facilities and activities. Together with Mum, Dad also established a scholarship fund in the BU School of Music, and in 1999 he was awarded the Foundation's Apex Award for his outstanding service.
He was also instrumental in expanding the academic offerings of the university, including, among others, establishing the Master of Music degree. Following his tenure as the President, Dad remained on the faculty at Brandon University until he retired in 1998. Throughout his career at Brandon University, he was a strong supporter of the BU Bobcat athletic teams. He and Mum were also passionate about the performing arts, attending many concerts, recitals and other events. They also established scholarships for students studying Vocal Performance in the School of Music.
Dad always believed in being actively involved. He held many academic leadership positions and Board appointments in organizations like the U.S. National Science Foundation, the New York State Board of Regents, and a number of other academic and research organizations. He was also a guest Professor at universities in Minsk (Russia), Prague (Czechoslovakia), and Nijmegen (The Netherlands). Where Dad really felt it was important to be actively involved was in the community.
In Brandon, he was actively involved on the Boards of the Brandon General Hospital (now BRHC), Brandon University Foundation, American Friends of Brandon University, the Manitoba Health Research Council, the Brandon Chamber of Commerce and Manitoba Hydro. He also established strong relationships with the Canadian Forces Base in Shilo and the 26th Field Regiment in Brandon. Outside of his career, Dad had a variety of hobbies and interests, including camping, canoeing, fishing (particularly fly fishing), flying his own aircraft, and teaching others to fly.
Dad was a strong family man. In particular, he was a loving and devoted husband to his wife of almost 65 years, Mary Louise (née Kreutziger), who survives him. He is also survived by his children: Cam, Barry (Marla), David and Stephanie; his grandchildren, Christina, Melanie (Sean Johnston), Jennifer (Devin BourdeauD'Hui) and Tom; and his great-granddaughter Taliya. He was predeceased by his father Harold Campbell Perkins, mother Rita, sister Mary Aitken, and brother Charles.
Funeral service will be held on Saturday, August 10, 2019 at 11:00 a.m. at St. Matthew's Cathedral, 403-13th Street, Brandon, Manitoba. Active pallbearers will be Jack's three sons, Cam, Barry and David, his granddaughters' fiancés, Sean Johnston and Devin BourdeauD'Hui, and close family friend John Russell. Interment at Rosewood Memorial Gardens will follow the service. A reception at Brandon University's Harvest Hall will follow the interment. All are welcome.
Dad was extremely proud of, and had a deep love for, Brandon University. In lieu of flowers or gifts, the family requests that donations in memory of Jack Perkins be made to the Brandon University Foundation by mail, online at BrandonU.ca/give or by phone at (204) 727-7374.