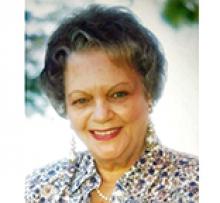 Joan Mary (née Cranwill) Speirs, beloved mother, grandmother and great-grandmother, passed away peacefully, with family by her side, at Rideau Park Lodge, Brandon, on Sunday, September 22, 2019, at the age of 94 years. She was born to the late John and Madeleine Cranwill at the Misericordia Hospital, Winnipeg, Manitoba, on June 16, 1925.
Joan spent her early years in the Norwood area of Winnipeg, where she attended Holy Cross School. As a young teen she moved with her family to Moose Jaw, Saskatchewan, a place she often spoke so very fondly of. After spending her teen years in Moose Jaw, Joan moved to Winnipeg with her family in about 1945 and lived on Toronto Street. In Winnipeg, she worked at Eaton's, in the mail order department, until she met and married the love of her life, the late John (Jack) Robert Speirs in 1951. Together they raised their four sons in the Windsor Park area of Winnipeg, where they met many new friends and neighbours. Joan and Jack retired to Penticton, British Columbia, in 1982, and on the death of her dear husband Jack in 1996 she moved to Brandon, to be closer to family.
Joan so enjoyed being with her family and was immensely proud of her grandchildren and great-grandchildren. "Grandma Joan" was always available to help with their care or to just spend time with them. Joan was so blessed and grateful to have many wonderful lifelong and new friends in her life. We will all dearly miss her wonderful, and sometimes risqué sense of humour.
Joan is survived by her three sons: John (Jocelyn) of Spruce Grove, Alberta; Ted (Connie) of Chater, and Scott (Trish) of Brandon; as well as nine grandchildren and 10 great-grandchildren.
She was predeceased by her beloved husband Jack, and dear son Robert and his wife Dianne of British Columbia; and brothers, John (Jack) Cranwill and James (Jim) Cranwill.
As per Joan's wishes, a family graveside service followed by a celebration of her life will be held in Winnipeg at a later date.
In lieu of flowers, donations in Joan's memory may be made to a charity of choice.