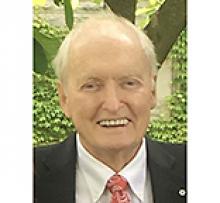 Peacefully, and with his family by his side, Donald Henry Penny passed away on
November 28, 2019.
He is survived by his loving wife Sandra (née Cantlon), son Darren Penny (Dianne), daughter Leanne Penny (James Holland),
step-daughters Rhonda Gruetzner (Olli) and Karla Grierson, grandchildren, Sarah and
Samantha Penny, Jackson and Abigail Potter, and Olivia Auriat, brothers, Keith (Marilyn) and Lorne; and sister Mary.
He was predeceased by his parents, Sam and Alice Penny, and by his brother Glen.
Don was born in Virden, Manitoba on
November 8, 1939, and was very proud of his rural upbringing. Always a planner, he formed a vision of his future at an early age and creatively carved himself a path, a shoe shine boy and a farm hand are just examples of the many hats he wore along the way. He moved to Winnipeg to study accounting and returned to Westman in 1962 as an articling student, joining the Brandon firm that would become MNP. He became a partner in the firm in 1965, and in 1977, took over the
leadership of Meyers Norris Penny as CEO. Don retired from the partnership in 1998 and from the MNP board of directors in 2005. Throughout his career, Don was steadfastly committed to serving his community and
profession. He gave generously of his time; his contributions on boards and committees, both for-profit and not-for-profit, are too
numerous to list. He was a mentor to so many. Don truly believed that the only way to grow personally and professionally is to lift others around you and help them achieve their
potential. Don's public contributions were
significant, but paled in comparison to what he gave his family. He highly encouraged
adventure, celebrated all accomplishments and supported any failures with unconditional love. He was incredibly proud of his children and grandchildren and the memories are countless, but the summers at the lake and the epic Christmases where he played Santa (literally) will live on forever.
A celebration of Don's life will be held at the Victoria Inn, 3550 Victoria Ave, Brandon, on Friday, December 27, 2019 from 2:00 to 5:00 p.m.
To many he was a business icon, but to his family, he was everything.