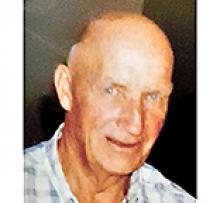 Leslie Alvin Dodds of Reston, Manitoba, passed away on June 3, 2020, at Willowview Personal Care Home, Reston with his wife, Sheila, at his side.
Alvin was born September 27, 1930. He was predeceased by his parents, John and Irvine (Dempsey), his sister, Margaret Caldwell, his brother-in-law Calvin Caldwell and his beloved Dempsey family. He leaves to mourn his loving wife of 27 years, Sheila, (nee Munro); his nieces, Peggy Hurd (Ray) and Marlene Reidle (Terry); and his nephew Kevin Caldwell (Dolores), as well as their children and grandchildren. Also left to mourn are the members of the family he acquired 27 years ago, his stepchildren, Gloria Penner (Randy), Clinton Nash (Sylvia), Randal Nash (Linda) and Dale Owen (Pat) along with six grandchildren, six great-grandchildren and two great-great-grandchildren. He loved family gatherings and we will miss him so much.
Alvin was born in Reston and took his schooling in the Huston School District. He spent his working life farming south of Reston. His enjoyment of his Black Angus cattle and his fondness of John Deere equipment were well known in the area. He was always ready to offer his neighbours a helping hand. Recently he was recognized for 50 years of working the gate at the Annual Reston Fair. For many years he helped to install the ice at the Reston Curling Rink.
Hunting was a lifelong passion. He was an avid dancer and through this, met his wife-to-be, Sheila. After he and Sheila were married, he took up golfing as well. Both of them curled locally and throughout the province.
After he and Sheila were married in 1993, they started to travel. They attended numerous local, provincial and international curling events including St. John's, Newfoundland. Every summer they pulled their fifth wheel to music festivals in Craven and Dauphin. They also enjoyed trips to Mexico, one to Mazatlan and one to Puerto Penasco.
A private graveside service will be held at Reston Cemetery.
In lieu of flowers, donations in memory of Alvin may be made to Prairie Mountain Health (for Willowview Personal Care Home) c/o P.O. Box 250 Reston, MB R0M 1X0.

e-mail messages of condolence
or sing the on-line Book of Condolences
at www.carscaddenfuneralchapel.com