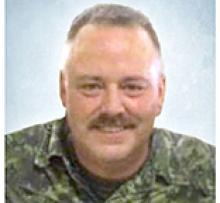 It is with great sadness that we announce the passing of Michael Patrick Maher on July 11, 2020, in Brandon, Manitoba.
Mike is survived by his children, Brenden and Siobhan and their mother, Cindy; his daughter Ashley; grandchildren, Ben and Finn; mother Jeannette; sister Kris (Tim); brother Bruce (Hae-jin); nephew and nieces, Logan (Paula), Brandi, James, Samantha (Ericka), Josun and Gina; great-nephews, Noah, Owen, Emmett, and great niece Lillie. Family was important to Mike and his loss will be felt by the Mahers and Cotes, and all the extensions of the family. Mike's second family was his friends he made during his career, whether it be members of the military or friends that he connected with during that time, and into retirement. "Mick" hopes you all know how much you meant to him.
Mike's greatest achievement outside of his children was his career. Mike joined the Canadian Armed Forces in 1985 and retired as a Warrant Officer in 2016. He spent years serving in Germany, as did his father before him, and it was where he was born in 1964. Mike took great pride in his time in the service, receiving many honours for tours in Cypress, the Gulf, Bosnia and Kosovo.
The family would like to give special thanks to Rick, Frank, Phil and Diane for their help when he needed them, Cousin Harry, who came for a day and spent a week to support Mike's mom in his final days, Dwayne and Jody for their support for his family, Georgette for helping his family through this difficult time, Cindy for being a rock and there for everyone, and most of all, his mother Jeannette who was beside him until the end.
Mike's next journey will be to reunite with his family members who went before him, all of his beloved dogs, and of course, his father, Harold (Harry.)
A graveside service will be held at Brookside Cemetery "Field of Honour", 3001 Notre Dame Avenue, Winnipeg, MB, on Monday, July 20, 2020 at 10:00 a.m. If you wish please bring a lawn chair. A celebration of Mike's life will be planned in the next year or so once there is no limitation on gatherings.
For those wishing to send flowers, please send them to Brockie Donovan Funeral Home by Saturday, July 18, 2020. Donations in memory of Mike may be made to a charity of your choice.