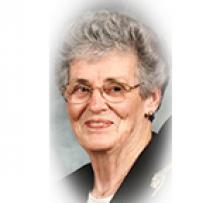 With sadness, we announce the passing of Margaret Elizabeth Mellor, aged 95 years, at the Grace Hospice on July 15, 2020.
Margaret will be lovingly remembered and sadly missed by her daughters, Sharon (David) and Betty Lou, stepson Wayne (Kim), stepdaughter-in-law Shireen, granddaughter Carmen (Rod), step-grandchildren, great-grandchildren, brother Bill (Grace), and many nieces and nephews.
Margaret was predeceased by her first husband Lynn Watt in 1973 and recently by her second husband Richard Mellor on March 16, 2020, her sister Mary (Howard), brother Edward (Edna), and stepson Fred.
Margaret was born in Minitonas and raised in Brandon, Manitoba. Margaret graduated as a registered psychiatric nurse from the Brandon Mental Hospital and following that, graduated as a registered nurse from the Winnipeg General Hospital.
Early in her nursing career, Margaret met Lynn while both were working at the Brandon Mental Hospital. Following their marriage in 1949, they relocated to Birtle, Manitoba to farm. Margaret continued her career as a registered nurse at the Birtle Hospital from 1961 until her retirement in 1985.
Following Lynn's death, Margaret met Richard. They were married in 1979. In 1985, Margaret and Richard embarked upon a long and happy retirement together. Margaret's favourite pastimes were needle work, hand quilting, gardening and dancing.
Margaret maintained a strong sense of family and community throughout her life. The delight of Margaret's life was her granddaughter Carmen and her many achievements, and more recently, her great-grandson Emmett.
Margaret and Richard relocated to Winnipeg in 2015 to be closer to their families. They enjoyed their residency at Lindenwood Manor where they met many new dear friends.
Margaret will be forever in our hearts and greatly missed by her family and friends.
A joint service to celebrate Richard and Margaret's lives will be held on Wednesday, July 29, 2020, at the Birtle United Church at 2:00 p.m. Linda Clark will officiate.

Remembrances and condolences may be shared at www.braendlebrucefs.ca

Braendle-Bruce Funeral Service of Russell, Manitoba in care of the arrangements (204)773-2747.