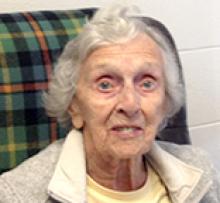 Margaret Mackay of Virden, Manitoba passed away at Virden Health Centre, Thursday, July 30, 2020, at the age of 95 years. Born in Edinburgh, Scotland, she was the eldest of four children.
Peg, as she was known by her family, was predeceased by her two brothers, Jack and Findlay Burns, and her dear sister Helena Blackwell. She shared many stories of her childhood and often spoke of family holidays visiting her grandparents on the Isle of Skye which was a place very dear to her heart. She also worked there in the Land Army during the Second World War.
After immigrating to Canada, Mum and Dad made their home in Manitoba and resided in Glenboro, Gretna, Winnipeg and Thompson. In 1970, the family moved to Grand Rapids and spent many happy years there. Upon retirement in 1987, they moved to Kelwood, Manitoba.
Mum spent the last 20 years in Virden. She was happiest when spending time in her garden, loved to feed the birds, enjoyed berry picking and knitting.
Her husband Ron (Scotty) passed away in 1992. She is survived by her three children, Anne (Ray Sebastian) of Virden, Ron Jr. of Brandon and Jennifer (Bob Fitzpatrick) of Zeballos, BC.
Mum was a very kind person, a woman of inner strength, with a streak of adventure. She was a beautiful soul and leaves behind a trail of beautiful memories. Thank you Mum!
A family tribute and celebration will take place at a later date.
The family would like to thank the many doctors and nurses in Virden that have cared for Mum over the years. A special thank you to the staff of The Sherwood Home who were so compassionate and caring to Mum during her stay.
For those who so desire, memorial tributes in memory of Margaret may be made to The Sherwood Home Activities Department, P.O. Box 2000, Virden, MB R0M 2C0 or to Virden and District Health Auxiliary Remembrance Fund, P.O. Box 2526, Virden, MB R0M 2C0.

"The kiss of the sun for pardon,
The song of the birds for mirth,
One is nearer to God's heart in a garden,
Than anywhere else on earth."

Messages of condolence may be directed to
www.carscaddenfuneralchapel.com