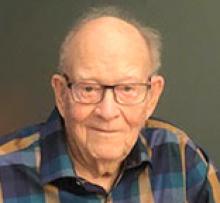 In his 98th year, after a long and happy life, Norris passed into the loving arms of Jesus.
Norris was the second of four children born to William and Elsie Pringle (Shewfelt). He was born on the family farm, southeast of 16-4-9 in the Municipality of Pembina. Norris lived the majority of his life in Manitou.
Norris farmed from 1939 to 1942, and from the fall of 1945 to 1960. A veteran of the Second World War, he served with the Seaforth Highlanders, and saw frontline action in Italy and Holland. In 1949 he married Violet Hinchey of Waskada, Manitoba. They were blessed with 68 years of marriage and two children.
In 1960 Norris purchased his father's insurance agency, and moved to Manitou. Norris was a respected businessman and enjoyed a successful career in the insurance business representing Portage Mutual, Wawanesa Mutual and Red River Valley Mutual. He sold Pringle Agency in 1988 and retired.
Norris was a happy man with many interests. Regimental in nature and kind of heart, he believed in a life of service combined with good fun. He rose each day his entire life by 4:00 a.m., because he had "things to do." He was a loving partner, devoted father, and worked tirelessly to provide for his family. He was profoundly proud of his wife and daughters.
Norris was a Life Member of the Royal Canadian Legion, Manitou Branch #21. He served as Legion Secretary for over 30 years, Branch President, and District Representative. He was a member of the Masonic Lodge, and the Order of the Eastern Star. He served as Master of the Masonic Lodge and Worthy Patron of the Eastern Star in Manitou. Norris served on the Manitou Hospital Board, the Church Board of Stewards, volunteered as a firefighter, umpired baseball games,and worked at the Legion Bingo every Friday night for nearly 30 years. Norris and Violet moved to Morden in 2000 where he became active at the Morden Friendship Centre and as a member of the Morden Hospital Board. Norris was a member of St. Thomas Anglican Church in Morden. His communities of Manitou and Morden could always depend on Norris to lend a helping hand.
Most often, Norris' workday ended at the dinner hour and the evenings were for enjoyment. He and Violet loved to dance, go to movies, boat and fish, play cards, and take leisurely drives. They embraced their friends and family, and laughter teemed from their home during card games, visits, and parties. Norris and Violet nurtured and enjoyed their large flower and vegetable gardens. Norris loved nature and animals.
He was a golfer, and it was an epic day when he shot a hole-in-one at Manitou Golf Course. He enjoyed duck hunting, wood working, and was a sports enthusiast. The Winnipeg Jets, Blue Bombers, and Toronto Blue Jays were his teams, and Norris was their demonstrative armchair coach and play-by-play colour man.
He also loved his cars. At age 95 he delighted in purchasing a brand new SUV, saying he thought he'd better buy a new vehicle before he got too old. Norris took pleasure in his weekly cribbage games with residents of Elks Park Place, and at age 97 was still very much a competitor. He looked forward to his Thursday church men's coffee time, certainly a highlight in his week. Norris was a voracious reader and loved history. As a boy, his mother taught him to cook, and Norris enjoyed cooking throughout his life. He excelled at creating homemade soups, and the freezer was always filled with his soups du jour.
Perhaps most notably, Norris was a master storyteller. Any conversation, news item, or even a drive through the countryside, would evoke a memory and a story ensued. Tales of his childhood and years on the farm were cherished. He fondly reminisced about his dad, who was not only a father, but a beloved friend and mentor. Norris' stories of his Army Days, both the antics and combat, were immortalized in daily conversations. Norris was forever a soldier in heart and spirit.
Norris never hesitated to voice his opinion. His personal values wove the fabric of his life. While those opinions and values were sometimes challenged as the world around him changed, he was true to himself, and never wavered in his beliefs.
In his final days, Norris was weary, and wished to leave his earthly life. He longed to be reunited with Violet, and prayed for God to take him Home.
Norris was preceded in death by his beloved wife Violet, and his sisters, Merle Boyd and Gwen Welsh. Norris is survived by his daughter Judy Pringle of Winnipeg, his daughter Janette Engen, and son-in-law Dave Engen of Lethbridge, Alberta, his brother Alistaire Pringle, and sister-in-law Beryl Pringle of Welland, Ontario, his nieces, nephews, and many friends and neighbours. He will be deeply missed.
A celebration of Norris' life will be held on Monday, August 17. A Legion Committal will be held at Manitou Cemetery at 11:00 a.m. The public is welcome. Social distancing protocol will be in effect. Chaplain Chris Lea and Rev. Diane Guilford officiating.
Following the Legion ceremony, a memorial service will be held at St. Thomas Anglican Church in Morden at 2:00 p.m. Social distancing, masks, and safety protocol will be in effect. Rev. Diane Guilford officiating.
Wheatland Funeral Home of Pilot Mound in charge of arrangements. Livestream link of both services available at www.wheatlandfs.com
In lieu of flowers, donations may be made to St. Thomas Anglican Church, 131-8th St. Morden, Manitoba R6M 1E3 or a favoured charity.

I have fought the good fight.
I have finished the race.
I have kept the faith.