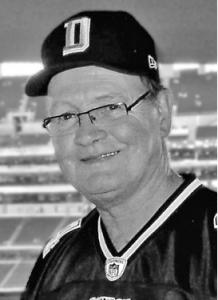 JAMES: Robert Howard (Bob) passed away peacefully with family by his side at the Brandon Regional Health Centre on Sunday, October 11, 2020 at the age of 67 years. Bob was born in Brandon, Manitoba on April 12, 1953, the fourth child of Ken and Vi James. The family farmed in the RM of Whitehead near Alexander, Manitoba. Bob attended Alexander School and graduated from Neelin High School in 1971. Shortly after graduating Bob moved to Kamloops, British Columbia, where he worked in a refinery for a short time before moving back to Brandon, where he started his 45 year career at Behlen Industries. Bob started at the bottom and worked his way up. Bob was the Maintenance Supervisor when he retired on June 30, 2020. Bob was very hands on and always willing to help solve any problem. Behlen lowered their flags to half-mast when they learned of Bob's passing. What a tribute to a very special man. At the age of 24, Bob purchased his 1967 GTO convertible. Bob so enjoyed that car for many, many years. Nieces and nephews borrowed the GTO for graduations and weddings. The GTO is still with the family. Bob married the love of his life, Kim Williamson, on October 19, 1985. They enjoyed both curling and slow pitch together for a number of years and had many fun times with family and friends. Bob and Kim were blessed with the birth of their son, Dallas, in 1988. Bob was a huge Dallas Cowboys fan so what a better name for their son! Bob loved being a dad. Bob and Kim both enjoyed the Dallas Cowboys and attended three games in Dallas, Texas. In the fall of 1990, Bob and Kim purchased the farm from Bob's parents and Bob was never happier as he was a farm boy through and through. Bob and Kim farmed for 18 years both continuing to work full time in Brandon before selling the farmland and keeping the 7 acre yard site. Bob loved being a grandpa! There was always a smile on Bob's face when Darius (5) and Darwin (4) were around. He would proudly drive the boys on the lawn tractor at the farm and at the lake showing them off to anyone who was near. Their mom, Kaisha, has a special place in Bob's heart. Bob will be dearly missed by many. He will be lovingly remembered by his wife of 35 years, Kim; son, Dallas; grandsons: Darius and Darwin and their mother, Kaisha; sister, Ellen (Jim) Cairns; brother, Jim (Heather) James; sister, Loretta (Wes) Williamson; sisters-in-law: Gail James; Deb Williamson; Sheri (Ed) Gilbert; Wenda Aube and many nieces and nephews whom he loved very much. Bob was predeceased by his parents, Vi James in 1994 and Ken James in 2002; brother, Len James in 2016; in-laws, Jim Williamson in 2007 and Audrey Williamson in 2013 and brother-in-law, Lorne Aube in 2017. The family would like to sincerely thank everyone who called, visited, dropped off food, sent flowers, cards or donated in Bob's memory. Thank you very much! A private service was held at Brockie Donavan Chapel on Monday, October 19, 2020 with Kim Lewarne as Celebrant. Dallas James was urn bearer. Interment will follow at a later date. Donations in memory of Bob may be made to the Brandon Regional Health Centre Foundation, 150 McTavish Avenue East, Brandon, Manitoba, R7A 2B3.

A recording of the service as well as the video tribute can also be found on website.

Bob James was a once in a lifetime kind of person.