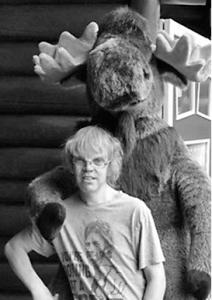 MOORE: It is with heavy hearts that we announce the passing of Dwayne Donald Moore on Sunday, October 25, 2020. Dwayne was born on November 26, 1970. He was born and raised in Brandon all his life, except for about three years when he lived in Winnipeg. Dwayne attended Riverview, Green Acres, Earl Oxford, and Crocus Plains schools. Through his school years, he met his three lifelong friends: Bruce Trick, Angela Judson and Rick Vanwynsberghe. When Dwayne moved to Earl Oxford, Mr. Metelski became his teacher there. He was instrumental in giving Dwayne confidence in himself. Dwayne flourished in Mr. Metelski's "mod squad" class. Dwayne moved from Earl Oxford to Crocus Plains High School. He went into the art program there. Dwayne flourished in Mrs. Orridge's art classes. Mrs. "O" became a friend even after Dwayne graduated. After Dwayne graduated from high school, he worked in restaurants, unloading semi's, and various other jobs including looking after his step dad's senior housing unit while he was away. In 1993, Dwayne was diagnosed with cancer. He was a very sick young man. He endured many months of chemo and then surgery. Through sheer determination and will to live, he survived and was cancer free for the duration of his life. He had a "never give up, keep fighting" attitude. Dwayne had a love of drawing. He had quite a talent! He often was asked to create sketches for others. He was very meticulous in his art and was so happy when his niece, Lucah, became interested in art. Dwayne would regularly call to see what she was working on. Dwayne was an avid collector of movies, comics, old books, and figurines of many varieties. He enjoyed showing off his collections to everyone. It brought him great joy. He was always collecting and learning. Dwayne treasured his family. You would often see him on the phone, texting, or messaging everyone. He shared his unique characteristics, including his love for animals and his big heart that carried love to anyone who came into his life. Dwayne is survived by his loving mother Dianne, stepfather Elwin, who he referred to as "Dude" or "E." He is also survived by his only sister Dana (Chris) and their four children: Mikayla, Micah, Hannah and Lucah. He is also survived by many aunts, uncles, and cousins, as well as many friends. Dwayne was predeceased by his father Donald Moore; Grandma and Grandpa Plewes; Grandma and Grandpa Moore; uncles: Danny, Dwight, Harry and Charlie and cousins Megan and Makaja. Dwayne's mother, stepfather, and sister will carry him to his final resting place. A private Family Service will be held at the Brandon Cemetery. The family has invited you to watch the livestream of the Memorial Service for Dwayne remotely on Monday, November 2, 2020 at 2:00 p.m., by visiting Dwayne's tribute page on Brockie Donovan's website at www.brockiedonovan.com. Dwayne had a love of animals. He quite often looked after his sister's dog and his mom and stepdad's cats. We are asking in lieu of flowers, a donation in Dwayne's name to be made to Funds for Furry Friends, #208-740 Rosser Avenue, Brandon, Manitoba, R7A 0K9. Private messages for Dwayne may be send to info@brockiedonovan.com.