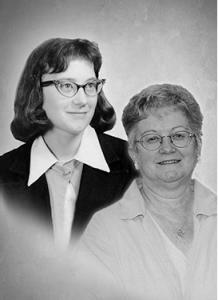 ROBERTS: Carol Anne Roberts (née Douglas) passed at her residence, Fairview Personal Care Home, on Wednesday, October 21, 2020. Carol was born on October 31, 1946 in Rocanville, SK to Art and Neiges Douglas. She enjoyed many happy years at the farm alongside her brother, Steven, and sister, Edie. The family sold the farm and relocated to Brandon in 1958. Carol had her first son, Darwyn, on November 1, 1967. She worked hard as a waitress raising her son and enjoyed his early years surrounded by family and travel. After returning to Brandon after living and working in Vancouver, Carol was introduced to Barry Roberts through friends. Barry and Carol married at City Hall on December 12, 1974 and Carol found herself returning to farm life. Carol and Darwyn joined Barry at the Roberts Homestead in the Rounthwaite district, where Barry would later adopt Darwyn and the family would welcome their second son, Robbie on August 7, 1977. Carol was passionate and committed to her family near and far. She was a doting grandmother to Darwyn's children, Kayla, Ryan and later her great-grandson, Epic. She was a proud of her family and a role model to her nieces and nephews and community at large. Over the years Carol's talents for baking, knitting and crochet were recognized at local fairs and gifted to family and friends. Carol's sweaters, slippers, afghans, and recipes can be found in households far and wide. She was an avid entrepreneur, and in addition to her talents with baking, knitting and sewing she would later create wordsearch books and cookbooks, all illustrated by her son Darwyn (if you have seen them you know the mouse!). Carol's wordsearches became a regular feature in the Wawanesa Lioness Express and many received personalized wordsearches created just for them. Carol was active in both the bowling and curling communities, outfitting her teams, and travelling across North America. Carol was proud to be recognized by the Wawanesa Curling Club and to become a lifetime member. Carol also held lifetime membership in the Brandon Amateur Radio Club, a world she was introduced to through her husband. Carol had a genuine presence and always thought about others before herself. She managed and maintained the family farm, hosted large and small gatherings over the years, donated passionately to her community and causes she cared about, but above all else was the epitome of a caregiver. After Carol left the farm, she moved into Kin Village in Brandon. A diagnosis of Alzheimer's would result in Carol relocating to Fairview, where she was able to live her final years near her husband on the 5th floor. She maintained her spirit and vigor while living at Fairview and was beloved amongst staff and fellow residents. Carol experienced many struggles and loss in her life, but she always persevered and faced each day with an optimism that was to be admired. Carol has left us to move on and reunite with her family. Carol was predeceased by her husband, Barry, sons Darwyn and Robbie, parents Art and Neiges and sister Edie, as well as Evan and Florence Roberts and brother-in-law, Trevor. Carol is survived by her daughter-in-law Hope, granddaughter Kayla (Ryan Sorenson), grandson Ryan, and great-grandson Epic. She will be remembered by her brother, Steven (special friend and sister-in-law, Jean) of Grand Prairie, AB and their children Kevin (Hema) of Kelowna, BC and Karen of Grand Prairie, AB and their children; as well as all the members of her extended Perreault family (especially the special group of cousins who remained present in her life over the years). Carol's memory will be treasured by her Roberts family, who built with her a history book of memories from over 40 years at the farm: brother-in-law Owen (Deb), sister-in-law Lynda (Tom), sister-in-law Val; nephews Mark, Vance, Sean, Marty, Dana and their families and nieces Elena, Bryna, Ashley and their families. Carol cherished her friendships and community and will be remembered by her friends and their families and the communities, businesses, and groups she engaged with over the years. Carol was remembered at a private service on Saturday, October 31, 2020 at Brockie Donovan Chapel and was laid to rest at the Brandon Cemetery. Reverend Harvey Hurren officiated. Pallbearers were Mark, Vance and Sean Roberts, Dana and Marty Roberts, and cousin, Martin Dupont. Honorary pallbearers were all of Carol's grandchildren, nieces, and nephews. Carol's family presented tributes in celebration of her life. Donations in Carol's memory can be made to the Alzheimer's Society of Manitoba, Unit 4B-457-9th Street, Brandon, MB, R7A 1K2 or the "Recreation Department/Activities" at Fairview Personal Care Home, 1351-13th Street, Brandon, MB, R7A 4S6.

Messages of condolences
may be placed at
www.brockiedonovan.com