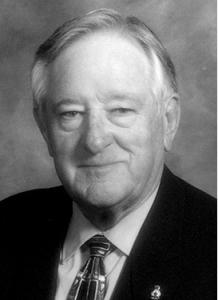 CAWSTON: William Reginald Clare. Born: August 7th, 1925 in Kelwood, Manitoba. Died: November 4th, 2020 in Calgary Alberta. Clare passed away quietly on Wednesday evening, November 4, 2020 at the Foothills hospital in Calgary, Alberta. Clare had been challenged with poor health since the spring of 2020 with lengthy stays in hospital in both Brandon, Manitoba, and Calgary. Clare was born in southern Manitoba where Clare's parents, (George) William and Ethel Cawston (née Davidson), lived at Kelwood, Manitoba and his father owned a garage business and Ford dealership. Clare was an active sportsman playing hockey and curling in Kelwood. Clare was also an avid singer in the local church choir, along with his sister Jean, a passion he would continue for most of his life. Clare enlisted in the Royal Canadian Air Force in August of 1943 and spent the next year training in Edmonton and Saskatoon. Clare was discharged from the Air Force and drafted into the Canadian Army in 1944, spending 1944 to 1946 in Winnipeg and Camp Borden, Ontario with the Royal Canadian Armoured Corp. Clare returned to Kelwood following the war to takeover a newly established International Harvester dealership. Clare ran the dealership along with the garage and Ford dealership, after his father's sudden passing in 1954, until 1956. Clare pursued his interest in flying, earning his private pilot's license in 1952 and flying his Aeronca Chief airplane around the Kelwood area. Clare met Joyce McDonald at a Davidson family dinner and their relationship became official when Joyce accepted a teaching position in Kelwood following Normal School. Joyce and Clare were married in Neepawa, October 20, 1951 and resided in Kelwood until 1955. Clare and Joyce moved to Winnipeg, Manitoba in the fall of 1955 where Clare pursued studies at the University of Manitoba, graduating with a Science Degree, majoring in Geology in 1959. A move to Virden was made in summer 1959, following graduation, and shortly after daughter Kathy-Anne was born. During a downturn in oil and gas drilling, Clare went back to school at Brandon University graduating with a Bachelor of Education in 1965. By 1969, after the birth of sons Bruce and Ronald, Virden was established as their permanent home. Clare pursed wellsite drilling and geological consulting for both the oil & gas and potash industries from southwestern Manitoba, throughout Saskatchewan and Alberta, and as far northwest as Fort Nelson, BC. Clare was a frequent member of the church choir and the local barbershop singers. Clare was a strong supporter of the local community as a member and president of the Virden Lions Club and a lifelong member of the Virden Legion Branch No.8 where he served time as President. Clare was involved in local business, serving on several boards and committees and Clare helped build a local Oil & Gas drilling company with his partners that served SW Manitoba. Clare was inducted into the Manitoba Oil Museum Hall of Fame for his contributions to the SW Manitoba Oil & Gas Industry. Clare had an unbreakable bond with SW Manitoba and greatly enjoyed his time at the Clear Lake family cottage in Riding Mountain National Park. Time at the lake along with trips "home" to the Kelwood, Neepawa and Brookdale areas where he visited with lifelong friends and family were cherished memories. Clare and Joyce left their home in Virden, where they had lived for 60 years, in September of 2019, moving to Riverheights Terrace in Brandon. Their stay in Brandon was brief and was followed by a move to Calgary in September of 2020. Loved and missed by his family, Clare leaves to mourn his wife of 69 years Joyce Cawston (née McDonald), daughter Katherine Corey and her husband Mitch Feldman, son Bruce Cawston and family; Natasha (Sam) and Ben (Jennifer), son Ronald Cawston, his wife Tari and children Benjamin, Nicholas and Zachary. A small family memorial service will be held in Calgary with a celebration of life and interment at the Kelwood Cemetery to be planned for the summer of 2021. In lieu of flowers, donations can be made to the Leukemia and Lymphoma Society of Canada in Clare's memory.