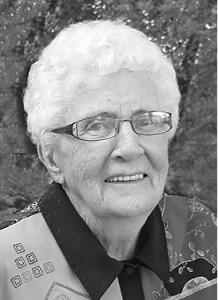 BERRY: Passed away at the Glenboro Personal Care Home on Saturday, October 31, 2020 at the age of 93 years, Helga Gudrun Berry (nee Hallgrimson), formerly of Cypress River, MB. Helga leaves to mourn her passing her three children Wendy Law of Glenboro, MB, Ed (Betty) Berry of Cypress River, MB, Connie Reykdal of Red Deer, AB; eight grandchildren Loris Lynne Desmarais, Keith (Holly) Sherman, Derek (Sarah) Law, Brent (Amy) Law, Terry (Kjarna) Law, Troy (Jennifer) Berry, Kyle (JoAnn) Berry and Curtis Reykdal; twelve great grandchildren Hailey, Tyson, Jorja and Tegan Berry, Ryden, Rhett, Jayce, Quin and Sadie Law, Cody, Dillan and Liam Reykdal and by two great-great grandchildren Malikaih and Silas Reykdal. She is also survived by three sisters Connie Adamson of Comox, BC, Ethel Brisley of Winnipeg, MB, Solrun (Chris) Chong of Vancouver, BC, sister-in-law Arlette (Peter) Johns of Surrey, BC as well as numerous nieces, nephews and extended relatives. Helga was predeceased by her husband George (2003), daughter Linda Sherman (2014), son-in-law Lyal Reykdal, parents Grimsi and Lara Hallgrimson, brother Hugh Hallgrimson, sister Vivian Houle, brothers-in-law Neil Houle, Ron Adamson, Hayden Brisley and Orbery McGiffin and by a granddaughter Cindy Reykdal. Helga was born January 9, 1927 to Lara and Grimsi Hallgrimson. Helga married George Berry in 1951. Together they raised four children, Linda, Wendy, Edwin and Connie. In her early years Helga worked at Holland and Glenboro egg grading stations. While raising her children and helping George on the farm she also worked at the Co-op, Lyal's Solo in Cypress River and many years at Macleods Hardware in Glenboro. In 1988 they retired and moved to Cypress River. Gardening and flowers were her passion. Helga loved to play the piano and played for dances with local bands. She also enjoyed entertaining at Glenboro and Baldur Personal Care Homes. She was a long-time member of the Legion Auxiliary. George passed away in 2003 and Helga remained in her home until 2018 when she moved to Glenboro Personal Care Home. During her stay there she referred to herself as "The Happy Hooker" as she spent countless hours crocheting doll blankets and lap wraps. She thought highly of the staff and kept them entertained with her witty sense of humour and off the cuff remarks. Her family are forever grateful for the wonderful care she received during her stay. She will be missed by all. A Family Graveside will be held at a later date in the Glencoe Cemetery, Cypress River, MB. Friends that so desire, memorial donations can be made in Helga's memory to the Cypress River Meal Program, Box 221, c/o Sherry Truelove, Cypress River, MB, R0K 0P0 or to a charity of choice.

Online condolence
can be sent
to the Berry family
by visiting
www.willmorchapel.com.

Jamieson's Funeral Service of Glenboro in care of arrangements.