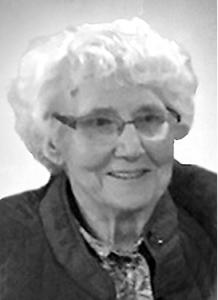 ATKINSON: We are saddened to announce the passing of our Mother, Grandmother and Great-Grandmother Margaret Jane Atkinson (Majcher) on Wednesday, January 6, 2021 at Fairview Personal Care Home at the age of 95 years. Margaret was born on February 18, 1925 in Calgary, Alberta to William and Jane Hudson. Her formative years were spent on the family farm 25 miles north and east of Calgary, near the hamlet of Kathryn. She relayed many stories to us all over the years of going to school in a sleigh and riding horseback the three miles from the farm to Kathryn. Playing ball at the July 1st picnics; swimming in the irrigation canals; showing cattle and sheep at the Calgary Stampede and trips to Seattle and Vancouver to see her aunts were other highlights of her youth. Margaret married Walter Majcher on December 16, 1947 and moved to Brandon where she resided until her passing. Margaret was an avid sports fan and enjoyed watching baseball, football, golf and pretty much any sport on TV. She was not only a fan of TV sports but played golf and swam for many years. Many hours were spent in gymnasiums, arenas and theatres watching her children and grandchildren. Mom was a homemaker, gardener, cook, baker, carpenter, seamstress and crafter. Knitting, crocheting and many other crafts filled her days up until the past few years. She knitted many sweaters, mitts and scarves for her grandchildren and great-grandchildren. In 1974 our father Walter passed away and Mom began a new era in her life. She became a Care Assistant and spent many years caring for the elderly. She became an avid traveller and enjoyed many trips to Hawaii, Australia, Mexico, and Palm Springs and crisscrossed Canada. In 1999, she married the late Sheridan Atkinson. Besides our father Walter, Mom was predeceased by her parents Jane and William Hudson; her brothers Hugh and Tom and sister Belle; several aunts, uncles and nieces. Margaret is survived by her daughter Jan (Wayne), granddaughter Andrea (Peter), Sarah and Jacob, grandson Marc (Sacha) Avah and Harper. Her son Will (Susan), granddaughter Natalie (Bob) and grandson Blake; as well as several nieces and nephews. We will miss Mom greatly but know in our hearts that the time has come to say goodbye. We want to thank the nurses and staff at Fairview Personal Care Home for the excellent care and attention they showed Mom for the past seven years. We truly appreciate everything you have done for her, especially in her final days. Due to COVID restrictions a Celebration of Life and interment will be held at a later date.