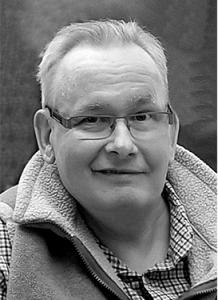 SIMMS: We are deeply saddened to announce the passing of William (Bill) Robert Simms on September 1, 2020 at Birch Personal Care Home, in Hamiota, MB. Bill was born in Hamiota on May 21, 1960, the second child of Bob and Margaret (née Roberts) Simms. Bill took his elementary schooling in Oak River and high school at Rivers Collegiate, graduating in 1978. For the summer of 1978, Bill worked at North American Lumber in Rivers and in the Fall for a cabinet maker in Rivers. He was then employed by the IGA in Hamiota from January 1979 to August of 1980 when he left to attend the University of Manitoba, graduating in 1984 with his Bachelor of Science Degree in Agricultural. He then put his agricultural knowledge to use working with his dad on the family farm at Oak River 22-14-22 until his Dad's passing in 1988, and then on his own. In 1991, he married Laurie Hawkins and they resided and owned the grain farming operation until 2008. Bill was very active in the community. He held several offices in the Oak River Curling Club and later also curled in Hamiota. He was a member in good standing and Past President of the Oak River Lions Club. For three years each he was secretary and treasurer of the Oak River Donors Choice. For one year, he ran the kitchen at the Oak River Fair volunteering because he was needed. He was always available to help anywhere in the community. He played ball in his youth but in later years stepped behind the plate to umpire until 1991. In addition to farming, Bill worked at Knights Accounting (now Alliance Accounting) doing income tax and farm accounting books. This job was Bill's niche. He loved going to work everyday, enjoying the company of the people he was working with as well as the clients. At the same time, Bill was also operating his own computer business, Simms Computers. Bill also really enjoyed carpentry work. He finished the basement in their home, renovated his Mom's home in Oak River and completed many other projects for family and friends. All of this came to an abrupt end in February 2009 when Bill suffered a stroke at the age of 48 that basically left him paralyzed on the left side. He struggled for 12 years with this handicap, the last two years in the Birch Personal Care Home. With the restrictions of COVID-19 we were unable to be with him to celebrate his 60th Birthday. Bill is survived by his wife, Laurie, of 29 years, his sister Lyn (Gib) Bell; nephew Richard (Tricia) Bell and their boys, Zachary and Ethan; niece Jennifer Bell (Al Marcoux); father-in-law Ken Hawkins; brother-in-law Ron (Sherry) Hawkins; niece Andrea (Matt) Pratt and their boys Jonah and Sawyer; niece Ashley (Branden) Hoggins; sister-in-law Pat (Angus) Norrie; niece Michelle (Allan) Knight and their children Kyia, Carter, and Karli; nephew Brett (Beth) Norrie and their children, Jaeda and Ethan; his Aunt Mae Roberts and Uncles George and Don Roberts; his Aunt and Uncle Don and Margaret Simms and his Aunt Dorothy Taylor and their families. Bill was predeceased by his parent, Bob and Margaret Simms and his mother-in-law, Ivy Hawkins, as well as several aunts and uncles. Through all of his life's trials, Bill remained stoic and dignified, never once complaining about the way his life had turned out. He will be sadly missed by all who knew him. Due to COVID-19 restrictions, Bill's graveside service has been postponed to a later date. Thank You to everyone who left condolence messages on Bill's tribute page at campbellfuneralhome.ca; sent cards, flowers, food or just offered their condolences on the street. It helped to know how well liked Bill was by the people in the community. A very special thank you to Dwayne Campbell at Campbell Funeral Home for his direction and guidance throughout this sad time. "You make everything easier to bear." Laurie Simms, Lyn (Gib) Bell.