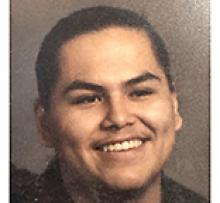 It is with great sadness that we announce the passing of our beloved son, father, brother, nephew, uncle, cousin and friend, William Walter. William was born on December 11, 1975 and passed away on February 14, 2021. It brings us comfort knowing William is reunited with his dad William Ahmo Sr. and his grandparents, Walter and Verna Fontaine and Donald and Mary Ahmo.
Left to cherish his memory are his mom Darlene, son Emory, sisters, Dara, Melanie Swan, Judy Klassen, Ramona Hunter, and brothers, Josh Ahmo and Robert Davis. Also left to cherish his memory are his uncles, Bruce Ahmo, Mike Ahmo, Wallace Ahmo; his aunts, Doris Ahmo, Angela Ahmo and Margaret Ahmo.; his great-uncles, Phil Fontaine and Bert Fontaine; great-aunts, Audrey Fontaine and Thelma Thomas, and numerous cousins and friends.
William was born in Winnipeg and raised on the Sagkeeng First Nation. William shared a strong bond of love with his grandparents, Walter and Verna. His grandparents shared the love of hockey and travel with the Sagkeeng Old Timers. At a young age William had the opportunity to travel with his mom, sister and grandparents to Europe, the United States and Canada. He helped his grandfather Walter with the Sagkeeng OldTimers and enjoyed learning from his grandparents in organizing and arranging games and trips.
William adored and loved his son Emory. He was a proud father and encouraged his son to pursue his dreams in becoming a lawyer. The proudest moment was seeing his son graduate from Grade 12 as he beamed with pride. He cherished his son and was proud in seeing Emory achieve his goals and furthering his education.
William had a great sense of humour, an infectious laugh, the biggest dimples and a smile that could light up any room. He will be fondly and lovingly remembered for his adventurous spirit, his kindness, generosity, compassion and love for his mom, son, sister, brother, extended family and friends. William had a big heart, was outgoing and enjoyed meeting new people who became his friends. He always gave to those less fortunate and wanted the best for everyone.
William loved the peace that prayer brought and followed and studied the Bible. He was also strong in his cultural beliefs. He had trust and faith in Creators plan. He knew that there was a better place and would often say to his mom, "Don't worry Mom I'm going to be okay."
Wake service will be held at the Christ Church Anglican Hall, Sagkeeng First Nation, MB on Monday, February 22, 2021 and funeral mass will be held on Tuesday, February 23, 2021 at St. Alexander Roman Catholic Church. Interment to follow at St. Alexander Roman Catholic cemetery.
Active Pallbearers will be: Josh Ahmo, Marcel Thomas, Donovan Fontaine, Vince Fontaine, Sonny Ahmo and Wendell Ahmo.
Due to Covid 19 restrictions, there will be a viewing with five people allowed at a time for 45 minutes with 10 people allowed for the funeral.

Condolences may be sent to the family
c/o Spirit Road Funeral Services Inc.,
PO Box 200, Fort Alexander, MB, R0E 0P0, 204-340-6490 or friends may leave a message of sympathy at spiritroadfs@shaw.ca