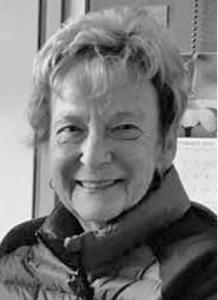 WILLIS: Irene was born on October 19th, 1947 in Hamiota, MB to James (Mick) and Jean Forsyth. The eldest of 6, Irene grew up playing on the 700 block of 19th street with the upwards of 60 playmates who lived on the block. The lawns were worn from games of hide and seek, kick the can, crokinole, and, occasionally, mischievous games of knock, knock ginger. Her education began at Alexandra school (now Betty Gibson School), then Earl Oxford, and, finally at Neelin high school. Later, Irene took a job at Dairy Queen which her brother, Brian, remembers as the source of complimentary ice cream cones and treats on his way home from school. Which, incidentally, was not on the direct route home. Irene married, Grant, her husband of 52 years, in December of 1966. The afternoon ceremony was followed by a reception where sandwiches and tea were served, held at the West End Community Center. Her oldest daughter Sherry was born before the family moved to Thompson where their second daughter Karen was born. Irene's siblings remember visits where she held down the fort with her two daughters while Grant traveled the north fulfilling work obligations. The family also enjoyed snowmobiling in the north and trips to Paint Lake where they fished, had picnics and water activities. Her sister, Marg, took a job in Thompson after being invited for a visit, Irene and the girls loved the company. In the late 70s, much to Irene's delight, they returned to Brandon as Grant continued to travel for work. She took a part-time job at the Bay, which eventually became full-time employment at Zellers, Where she met some lifelong friends and learned the fine art of bargain hunting. Irene's brother, Brad, remembers the best vacation he ever had was tagging along with Irene, Grant, and the girls on a trip to the Black Hills in a borrowed, converted school bus. That was only one of the few vacations on which he joined. Irene also took him in when he decided to leave school at a young age and get a job. She had a big heart and was always willing to help. Years later, he was able to return the favor in the best form he could, by taking her to her cancer treatments when he was able to make it back to Brandon. Along with her busy work schedule, Irene loved to tend to her yard and her house was always in some state of continuous renovation. She was independent, clever, and able to fix almost anything in need of repair and became an expert at maintenance and home improvements. During the times when Grant was home, the family spent many weekends with Grants brother, Art, and his wife, Bonnie. Many pleasant days were spent with her sister, Linda (Glen), at their farm north of Oak Lake. Hours were spent by the pool with the grandkids or touring the countryside as Irene appreciated Linda's zest for life and willingness to create an adventure. Shopping trips were another favorite expedition with her sisters (Margaret and Linda). Ever the bargain hunter, she eagerly found treasures for her kids, nieces, nephews, and, eventually, her own grandchildren. After Linda's passing in 2014, a light was lost in Irene's eyes and she was never the same. After the girls left home, she joined Grant traveling to various work locations in the US. She retired from this after a few harrowing border crossing experiences and decided to stay home, in Brandon, to spend time with her grandchildren, who she adored. Despite her diagnosis of terminal cancer in 2017, Irene became the main caregiver when her husband was diagnosed with the same disease in 2019. She cared for him without complaint, making every effort to keep him comfortable until his passing. While, at times, their marriage was not perfect, when Grant passed away in July of 2019, Irene often mentioned the hole his absence left in her life and she missed him dearly. Friends and family describe Irene as a person who was accepting of others and without judgment. She was the family matriarch on whom we depended on. The anchor of the family, the keeper of news who made sure it was shared with all keeping us connected. She was loyal and dependable as a wife, friend, sister, mother, and grandmother. She played all these roles the best way she knew how with quiet strength and dignity always putting herself last. A person who was always willing to lend a hand to help, an ear to listen and give what she could to help others. Irene loved a phone call and used it to keep in touch with many friends and family during her illness. Including her brother, Bob, who mentioned his phone calls where they shared mutual family news which was passed on to the rest of the family. Her daughter's joke of dreading, lengthy phone calls but now reflect on how the phone calls are missed and the silence deafening. After a lengthy battle with cancer and subsequent remission, Irene passed away from an aneurysm on March 24, 2020. Irene was cremated and no formal service was held, as per her wishes. In loving memory, Irene was predeceased by her husband Grant, parents James and Jean Forsyth, younger sister Linda (Glen) Bailey. She is survived by daughters Sherry Antonation, Karen (Jason) Ballingall, grandchildren Hannah, Marc, Shane, and Ryan; brothers, Bob (Donna), Brian (Helen), Brad (Elaine), and sister, Margaret Forsyth, as well as extended family and dear friends.

She was loved and
is missed by all.