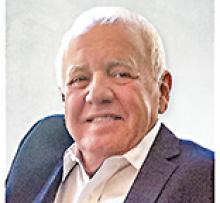 Morley Minuk, beloved husband of Kimberly Minuk (nee Kulba), of Calgary, AB, passed away on Friday, March 26, 2021 at the age of 74 years.
Morley was born in Winnipeg, MB on March 10, 1947 and moved to Calgary in 1980. In 1982, he married his wife, Kimberly.
Morley was a passionate entrepreneur, a pool shark, and a successful salesman. He was happy to talk real estate to anyone who would listen. He had a quick wit, loved a good joke and was an avid storyteller. He was always willing to help someone in need. His infectious personality, smile, and stories will be greatly missed.
Besides his cherished wife of 39 years, Kimberly, Morley is survived by his two loving children, Lauren (Eric) and Molly. He is also survived by his brother who was also his best friend and sister-in-law, Joey and Sharon. Morley was predeceased by his parents, Isadore and Ruth Minuk; and his sister Dorothy (Minuk) Bergman.
A private funeral service will be held on Saturday, April 10, 2021 at 2:00 p.m. Family and friends are invited to join Morley's service streamed live at https://mhfh.com/tribute/details/32873/Morley-MINUK/obituary.html#tribute-start on the day of the service. For those who are unable to view live, a recording of the service will be posted. Condolences, memories and photos can also be shared and viewed here.
In living memory of Morley Minuk a tree will be planted in the Ann and Sandy Cross Conservation Area by McINNIS and HOLLOWAY FUNERAL HOMES, Crowfoot, 82 Crowfoot Circle NW, Calgary, AB T3G 2T3, Telephone: 403-241-0044.