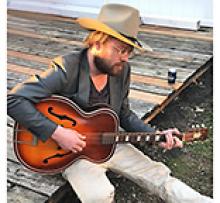 Kipp Christian Kocay, beloved son of Ulla Liljegren and William Kocay, passed away suddenly on April 7, 2021.
He is survived by his parents; grandmother Shirley Kocay of Clandeboye; grandparents, Aimo and Anneli Liljegren of Finland; sisters, Sheila Gagnon and Sanna Kocay, and numerous aunts, uncles, cousins, nephews, and nieces.
Kipp was a giant, creative, musical talent, with hundreds of friends. We all miss him enormously.
Private funeral service will be held on Friday, April 16, 2021 at 1:00 p.m. and can be viewed at www.gilbartfuneralhome.com

Condolences maybe left on his tribute wall at www.gilbartfuneralhome.com