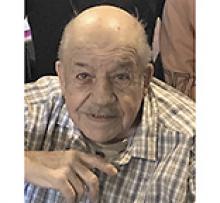 It is with great sadness we announce the passing of our dad, Joe Lenchuk at the age of 79 years.
Surviving are daughter Shelly Wright (Tim Wright), son Darryl Lenchuk (Anne Morin); grandchildren, Blair Colles, Brooke Colles (Troy Byzuk), Morgan Lenchuk and her mother Nita Jackson; great-grandchildren, Sequoia Mayo, Zyrah Mayo and their mother Melissa Mayo, Colbie Byzuk. Also left to mourn sister Elaine Lenchuk; brothers, Lawrence (Larry) Lenchuk (Diane), Glen Lenchuk (Ev); sister-in-law Pat Lenchuk, as well as numerous neices, nephews, cousins, friends.
Predeceased by life partner Dagny Lenchuk, father Johann (John) Lenchuk, mother Mary Lenchuk (nee Wawrykow) and brother Karl Lenchuk.
Dad was born in Gimli and raised in St. James area in Winnipeg. Dad was a carpenter by trade and known in the Interlake area for his carpentry and vinyl siding skills. Dad's younger years were spent working in the far north. Dad built three homes for his family. The first home was in Headingley, then Clandeboye and then his retirement home in Petersfield/Matlock area. After working for various construction companies Dad decided to go independent and started Joe Lenchuk Construction. Dad hired local helpers and made new friends through his helpers and customers all over the Interlake area. Dad's life lesson to us kids was, you have to work hard to get what you want.
Dad enjoyed travelling to many areas in Canada. Dad and Mom enjoyed time in Florida, and especially his time on a Caribbean Cruise. Although travel was enjoyed Dad mostly enjoyed the peaceful lifestyle of living in the Interlake and being close to home. Favourite pastimes were fishing, hunting, trapping, gardening, berry and mushroom picking, and birdwatching. Dad was always excited to show his grandchildren and great-grandkids how to call the birds and feed them from your hand. Dad enjoyed holiday dinners when all the family was together. Dad was a good cook and took pride in his bread making and Saskatoon recipes he created. In retirement Dad enjoyed working and selling his Saskatoon berries which he planted and took meticulous care of. Dad's musical talent was his guitar which we grew up listening to and singing along as a family. Dad's knowledge of history, trees, nature and birds was passed on to all of his family. He was happiest when he was being productive. Using his tractor to cut and split wood was more of a hobby than work to him. Dad was a very hard working independent man. Your work is done, now it's time for rest Dad.
In keeping with Dad's wishes, cremation has taken place. Due to Covid an immediate family only service will be held at Gilbart Funeral Home in Selkirk, Manitoba on Wednesday, April 14, 2021 at 1:00 p.m. Those wishing can watch the service live streamed through Gilbart's website at www.gilbartfuneralhome.com.
The family wishes to thank Dr. Zahari, Dr. Ian Alexander and staff on Medical 2 at Selkirk Regional Health Centre as well as the staff at Red River Place in Selkirk.

Dad you will never be forgotten and
always missed and loved. XOXO

Our loss is heavens gain!