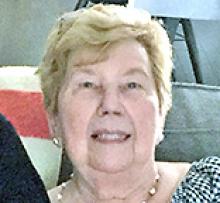 The family of Annemarie Peukert are sad to announce that on April 11, 2021, she passed away after a short illness.
Annemarie is survived by her daughter, Petra (Tim), her grandson, Blair (Samantha), her granddaughter, Sasha (Ted), and her great-grandchildren, Eli, Lila, Sophie and William. Annemarie is also survived by her eldest sister Traute. Annemarie was predeceased her husband, Fritz, her parents, her sister, Hildegard and brother, Manfred.
Anne was the third of four children born to Frans and Martha Willud, and she spent her early years in East Prussia. The family was transient throughout the Second World War, eventually settling in Bremen, Germany. It was in Bremen that Anne met Fritz at a dance. The couple married on New Year's Eve 1955, and they welcomed their daughter, Petra in June 1956. The family left Germany in 1960, to reunite with family who had already settled in Canada. After a brief stint in Winnipeg, the family settled permanently in Selkirk, Manitoba. Anne worked as a housekeeper for several places in Selkirk, and then she worked at the Selkirk Mental Hospital in the laundry and the kitchen. Anne's favourite job was serving coffee at the Manitoba Rolling Mills, as she was able to interact with everyone there. Once her first grandchild was born in 1979, she became a full-time Oma. Anne supported Fritz when he embarked on new work ventures, and provided a meticulous home for her family.
Anne will be remembered for many things, but most of all, she will be remembered for her large personality. Anne loved being around people, and when she was at an event, everyone knew that she was there. Anne loved to celebrate every occasion with a big party, and those parties were epic when she and Fritz were young. Anne valued family above everything else, and that family included all of the German cousins who were as close as siblings. Anne loved spending time at the cottage in Hillside Beach, and she and Fritz were able to travel the world. Anne's flower gardens were absolutely breathtaking.
A celebration of Anne's life will be held on April 19, 2021 at 1:00 p.m. at Gilbart Funeral Home, and due to COVID-19, it is by invitation only.
In lieu of flowers, donations can be made to the Heart and Stroke Foundation of Manitoba.
The family would like to thank the staff at Woodland Courts, Selkirk Home Care, the Selkirk Regional Health Centre and Dr. Cynthia Czajka-Fedirchuk for their exceptional care of Anne during her illness.