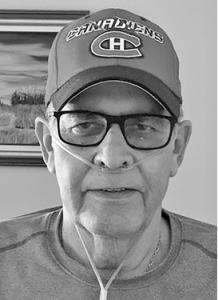 FLEURY: It is with great sadness that the family of Albert Fleury announces his passing at home on April 19 with his wife and best friend by his side. Albert was born in the Miniota Nursing Home on July 29, 1947 the youngest of 16 children born to Ruby (Mockford) and Fred Fleury. In his younger years, the family moved several times as his dad followed his job with the CNR. They finally settled west of Beulah at Uno, MB. He attended school in Beulah until grade 8 and high school in Birtle. Albert led an active life working for CNR for 15 years, drove a semi for Bicknell's for 5 years and ended his working career with Manitoba Infrastructure and Transportation Birtle yard for 21 years, retiring in 2007. He played ball for the Beulah Fastball Club and hockey with the Birtle Bruins and Birtle Old Puckers. Over the years he enjoyed snowmobiling, camping, and golfing. As his health began to fail his passion was meeting with the coffee crew daily where the teasing was a constant. He was a Habs fan, a Jets fan, and a Blue Jays fan. Albert was predeceased by his parents and all his siblings and is survived by his wife of 53 years, Jan, his daughter Janine (Randy) Urbanovich and his grandchildren, Janessa and Brody Urbanovich. He is also survived by his sister-in- law Gloria Fleury, Jan's sister Bev (Phil) Elchuk and several nieces, nephews, and cousins. A funeral service will be held at a later date. If friends so desire, donations may be made to The Birtle Foundation, Manitoba Lung Association or a charity of their choice.

Remembrances and
condolences
may be shared
with the family at
www.braendlebrucefs.ca
Braendle-Bruce

Funeral Service of Russell are in care of arrangements.