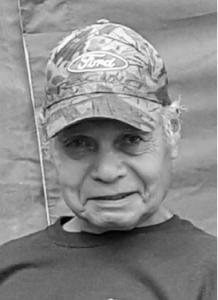 STOCK: Carman "Jack". It is with profound sadness that we share the news of the passing of Carman "Jack" Stock on Saturday, April 24, 2021 at Brandon Regional Health Centre, after a long period of illness. Jack was a gentle, quiet man who enjoyed his time with his family, a cold Labatt's Blue, laughs with his friends, Ford vehicles, his many cats, and being kind to his neighbours and friends. He was predeceased by, and is survived by, many people who he loved, appreciated and were part of his community. Jack, a Six Nations (Wahta) Mohawk, was born on March 23, 1939 in Gibson, Ontario. He attended the Mohawk Institute Residential School in Brantford, Ontario, until he was forced out after grade 8. He was a Residential School Survivor and that is part of his story and legacy. He joined the military in 1961 and was a proud member of the Canadian Army Corp of Field Engineers, serving with them until his retirement in 1985. His military career allowed him to serve from coast to coast to coast within Canada and took him overseas, including two United Nations Peacekeeping missions. Jack really enjoyed the many people he served with and some of his best times in later years were meeting up with old army buddies and sharing stories from those times. In the early 1970s, Jack met Peggy and her two boys Donny and Steven. Even though Residential School did not give him much modeling of family life, he took this family in and loved them till the very end. He was a caring husband who cooked the majority of the meals, made Peggy's extended family a priority, and built a home wherever they happened to be living. He lived out the reality that love is thicker than blood and was a dad and grandpa in every sense of the word. In 1978, they were posted to CFB Shilo, MB where Jack and Peggy lived for over 40 years. Jack was an excellent curler and dart player, and member of the Shilo Men's Club and Royal Canadian Legion for 47 years. In 1985, they bought their first home in the community of Sprucewoods where he took much pride in his yard and was an excellent neighbour. He could build or fix almost anything and would use his snow blower to create paths to all of their neighbours. He was kind to all animals, be they wild or his beloved cats. Jack enjoyed times with friends and their yard was often the place that a bonfire would be burning, and neighbours would stop in for a drink and to share stories. Well into his 80s, Jack would spend his time helping his neighbours and kids build or fix something. Jack is deeply missed as Great-Grandpa, Grandpa, Dad, Uncle, Son, Brother, Husband and friend. The family would like to thank the staff of Brandon Regional Hospital 3rd Floor and Assiniboine Centre 2nd floor who went above and beyond in their care for him. Jack was not a perfect man; however, he was a generous, peaceful, and good man with a warm presence and laugh, and who can ask for a better legacy than that? In lieu of flowers, please give to a charity of your choice. Or better yet, when it is safe to do so, grab a case of whatever you like to drink, light a bonfire, and sit around with family and friends to celebrate old stories, create new ones, and raise a glass to what is good in life…and to Jack. The family will cherish Jack's memory privately.