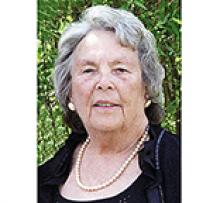 It is with deep sadness that we announce the peaceful passing of Phyllis Irene Olson at Health Sciences Centre on May 4, 2021.
She is survived by her children, Jona and David (Jennifer); grandchildren, Jennifer (Jamie), Dustin, Erik and Karl; great-grandchildren, Jakob and Jerika; sisters-in-law, Carole and Colleen; nephews, Norman (Darlene), Tim, Joel (Laurie) and Louis (Tia).
She was predeceased by her husband of 63 years, Allan; parents, David and Mabel Lloyd, sister Wilda, brother-in-law Arni, son-in-law Randy, grandson Kristjan, and granddaughter-in-law Amanda.
Phyllis was born March 8, 1932 in Estevan, Saskatchewan. Shortly after her family moved to Manitoba; but she was always proud of her Saskatchewan roots.
She met her loving husband Allan shortly before graduating from Nursing in Winnipeg in 1954, marrying soon after in August 1956; and before long Jona and David made their arrival.
Throughout the years, both Phyllis' and Allan's careers took the family to many places throughout the world. Along the way, their outgoing personalities and a joy for life provided them the opportunity to make many lifelong friendships. This is where Phyllis' love for entertaining began to flourish; whether it be large family gatherings or the unexpected visitors that Allan brought home, Phyllis was able to make you feel welcomed. Bridge was another pastime Phyllis had a passion for and always said "You could find a bridge player anywhere in the world."
In 1975, they finally settled in Gimli building their home on Willow Creek. With Phyllis' knowledge in Public Health; she was called to lead the establishment of the Home Care Programming throughout the Interlake region. She was very proud of what her team accomplished; as this was something she strongly believed was needed. During this time, Phyllis was also actively involved on a number of boards and volunteer groups in the community and upon her retirement in 1993 her participation with these increased and became more age friendly focused.
In retirement, they were able to further travel but loved their winter getaways to Mexico and Vancouver Island.
You will be missed and forever loved by all Phyllis, Mom, Nana and Auntie Phyl.
Our family would like to thank Dr. Ade, as well as Crystal and Toni from home care for the care and compassion they provided to Phyllis.
In keeping with her wishes cremation has taken place and a private family service will be held at a later date in Gimli, Manitoba.
In lieu of flowers, donations may be made to the Heart and Stroke Foundation of Manitoba, the Kidney Foundation of Canada, as well as Craig Street Cats in Winnipeg, MB where she found her special "fur-iend" Holly.