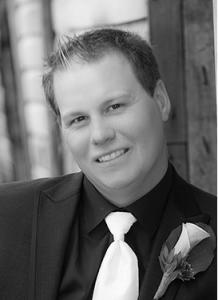 FARDOE: Eric Leonard, age 33 years, loving husband and father, passed away accidentally on Wednesday, May 19, 2021 while on his way home from Thompson. Eric was born on July 22, 1987 in Brandon, Manitoba. He grew up on the family farm in the Brandon Hills while attending Meadows and then Crocus Plains School. After graduation, Eric attended ACC to receive his Red Seal in plumbing. He worked at Humpty's, Coop Gas Bar on 6th Street, Action Power, Houston's, Brandon Heating and Plumbing, Capital Mechanical and then back to Brandon Heating and Plumbing. On occasion, Eric helped on the farm wherever possible. While attending high school, he met Stacy. They were married in 2014 and remained in Brandon to raise their sons – welcoming Wyatt in 2015 and Walker in 2019. At a young age, Eric took up motorcross which grew to become a favorite pastime. From racing at Farm Boys Motocross track to travelling all over with his Dad, brothers Adam and Chase and cousin Tanner, making up the pit crew, winning numerous trophies. Eric also loved cooking, travelling, farming, ski-dooing and fixing things. Eric is survived by his wife Stacy (nee Wilkinson), sons Wyatt (5) and Walker (2); parents Ed and Denise; sister Mandy (Brad) Harvey; brothers Adam (Wendy) and Chase (Alyssa Cooley); in-laws Darcy and Pam Wilkinson; brother-in-law Brett (Katherine) Wilkinson; sister-in-law Amanda (Nick) Murray; nieces and nephews Logan and Leah Harvey, Dylan, Olivia and Addison Wilkinson, Colton and Keira Murray. Eric was predeceased by his grandparents Bill and Anne Fardoe and Len and Gwen Kindrat. The Celebration of Eric's Life was held at Memories Chapel on Tuesday, June 1, 2021 with Eric's sister, Mandy Harvey as Celebrant. Eric's parents, Ed and Denise were urn bearers. Interment followed at Rosewood Memorial Gardens. Donations in memory of Eric may be made to a charity of one's choice.