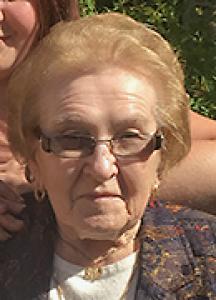 STADNYK, Mabel Stadnyk (nee Ewanyshyn) was born on July 31, 1927, in Shoal Lake. She is one of the twins born to the Late Fred and Anna (nee Fiel) Ewanyshyn. Mabel spent the majority of her life working hard on a farm and the restaurant business before and after she became a wife, mother and grandmother. She married Mathew Albert Stadnyk on July 30, 1948, in Grandview, (deceased October 15, 1991), where they farmed near Shoal Lake. Together they had eight children. Mabel had a green thumb and no problem providing her family with preserves for the cold Manitoba winters. The paddle in her sewing machine, that remained in the living room, was always moving in time to keep everyone clothed. She managed to care for poultry that was processed for the family meals and aided Matt with the mechanics of their construction business contracted out to the Manitoba Highway Department. They were both loved and respected by their family. After leaving the farm in 1986, Mabel resided in Brandon. She traveled to Puerto Vallarta, Mexico; Montreal, QC; Vancouver, BC; and Edmonton, AB to visit her children. She traveled on bus tours with her twin sister Helen and brother-in-law Matt Yaskiw and friends on a regular basis. The funeral service was held on Thursday, August 12, 2021, at 10:00 a.m. from St. Josaphat's Ukrainian Catholic Church, Shoal Lake with interment following in the parish cemetery. Fr. Jay Korban officiated. Cantor was Olga Woychyshyn and Elder was Leonard Hullick. Pallbearers were: Orest Buternowsky, Rod Wasilka, Lennie Wasilka, Brad Matiation, Calvin Malchuk and Ron Buternowsky. Crossbearer was Darcy Buternowsky, and the eulogy was ready by Linda Stadnyk. If friends so desire, donations may be made to St. Josaphat's Ukrainian Catholic Church and Cemetery. Remembrances and condolences may be shared with the family at www.raesfs.ca.