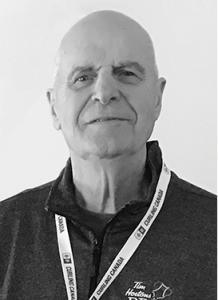 AURIAT: With great sadness we announce the loss of beloved husband, father, and grandfather Georges Andre "Andy" Auriat. Andy passed away on September 1st, 2021, at the age of 82, following a courageous battle with cancer. A devoted family man, Andy needed almost nothing else except his armchair, the news, and coffee with his friends. He always seemed to know everybody. A teacher for many years, his walks were often peppered by calls of "Hello, Mr. Auriat!" Andy was a guy who was interested in people; he loved to hear their stories and regale them with his own, particularly of his early life growing up on the farm. Born at the beginning of the Second World War, Andy responded to adversity with a scrappy irreverence, and many of his anecdotes were of he and brothers Bert and Marcel getting into shenanigans with neighbouring families. He often related his stories with a crooked smile, punctuating them by slapping his knee and chuckling darkly to himself. Andy was born August 24th, 1939, in Rose Valley, Saskatchewan, to a large French Canadian family. He grew up working on the family farm alongside his nine older brothers, two older sisters and nephew. He loved following the news on the radio and joining the family in political debate. After completing his Grade 10 in Saint Front, Andy graduated from high school in Oliver, BC. He attended UBC for one year, but after meeting his soon-to-be wife, Loraine Auriat (née Hutson), on a visit to Bellsite, Manitoba, he transferred to Brandon University, there completing his BA and B.Ed. A lifelong hard worker, Andy picked fruit in Osoyoos BC as a teenager and worked in logging on Vancouver Island. Andy shone in any job where he got to meet new people and share his stories. He began his teaching career in Sioux Valley, MB, and moved on to Central School, Fleming, Earl Haig and finally King George. After accepting early retirement at age 55, Andy soon returned to the Brandon School Division as a substitute teacher, continuing until the age of 73. A strong believer in education as a means to overcome early circumstances, as well as the importance of unions, Andy worked locally for the Manitoba Teachers Society, and served as president for a period. He also belonged to the NDP for many years. Andy played baseball and bowled recreationally, and also coached volleyball, basketball and badminton through school and baseball and hockey in the community. He often took his students on an end-of-year camping trip to Spruce Woods or Riding Mountain. Throughout the 1960s, 70s and 80s, he went on many family trips throughout Canada accompanied by his wife and children, visiting siblings and seeing the local attractions. In later years Andy became an adventurous traveller, visiting France, Israel and Ireland and making several visits to Shooting Star Casino in Minnesota. He also spent many hours conquering Candy Crush and sudoku and discussing the state of the world with his coffee buddies. Until last year, he walked regularly at the Healthy Living Centre and was always ready to lend a helping hand to his neighbours on Queens Crescent. Andy also took an interest in the Adult Education program his daughter Joy taught at Hollow Water First Nation, bringing gifts, attending graduation ceremonies and making certain her students always had coffee supplies on hand. Andy is survived by his wife of 59 years, Loraine, and their three children, Joy, Kerry, and Lisa (Mark), as well as grandchildren Emily, Olivia, Brooke, Adam, Lauryn and Austin. He is also survived by his older brother Louis, and sister Madeleine. Andy was predeceased by his parents, Francois and Victoire, and siblings Pierre, Edouard, Victor, Paul, Jean, Therese, Marcel, Germain, and Albert, as well as nieces and nephews. A Celebration of Life ceremony will be held at the Victoria Inn on Friday, October 8, 2021 at 2:00 p.m. In compliance with Public Health Orders, proof of full immunization will be required. All are welcome to join in casual attire. In lieu of flowers or donations, Andy's family asks that attendees treat a friend or stranger to a coffee in his memory.