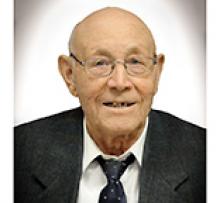 It is with very heavy hearts that we share the news that our cherished Dad has passed away on September 10, 2021, at the age of 99 years.
Ernie was born in the Dry River District, MB on January 26, 1922, the second son of Tom and Alma (Chassé) Delorme. He received his education at Dry River School, and worked on the farm and for farmers before joining the Army in 1942. Dad served in the Royal Canadian Artillery protecting the Canadian West Coast until he was sent to England. When the war ended in Europe he signed on for the Pacific Force until the war ended there, thus serving three years, three months. Ernie married Imelda Dupuis on November 19, 1946 in St. Jean Baptiste, MB. In 1949 Dad and Mom bought a farm in the Stuartville District on top of the Pembina Valley. There they raised their family of five. In 1967, they bought and moved to another farm near St. Alphonse, MB. When Mom and Dad retired they moved once more to Manitou, MB in 1997. In his 99 years, Dad demonstrated how to live well through love, devotion, kindness and hard work.
He enjoyed farming, sports, music and family. Music was a big part of life in the Delorme family, and Dad, being no exception, played the violin enjoying many fiddling contests and gatherings. Dad also loved baseball and was well known as a pitcher with a 'mean curve'. In 2013 he was inducted into the Manitoba Softball Hall of Fame. It gave us such joy to see him and Mom travel and enjoy a variety of hobbies in their retirement years, such as woodworking, dancing, crafts and visiting friends and relatives across Canada.
Ernie is survived by his loving family, Yvonne (George Jansen), Roger (Hélène Grenier), Mariette (Bill Howatt), Gerry (Darlene Kowalke) and Laurie (Scott McPherson), 16 grandchildren, 26 great-grandchildren and three great-great grandchildren. Also sisters, Velma (Allen Dunne) and Mildred Dunne, sisters-in-law, Darlene and Helen Delorme, and brother Leonard (Neen). Dad was predeceased by Mom in 2010, brothers, Alvin and Teddy, sisters, Reta (Lloyd Hannah), Leona (Walter Jans), Eleanor (Leroy Harmon), and grandsons, Jordan and Louis.
A family service was held September 14, 2021 in the Our Lady of Assumption Catholic Church, Mariapolis, MB.
Donations in memory of Ernie may be made to the Foyer Notre Dame, Box 190 - 40 Rogers Street, Notre-Dame-de-Lourdes, MB R0G 1M0 or to a charity of one's choice.