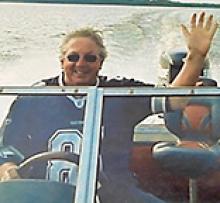 It is with great sadness that we announce the very sudden loss of Al Brazeau on September 11, 2021.
Al was born in Sudbury, Ontario in 1944 to Alexandre Brazeau and Alice Lauriault, where he spent his youthful years alongside his two sisters, Jacqueline (Kemp), Rochelle (Chartier) and brother Norman Brazeau (predeceased September 30, 2013).
Al began a Military career in the Air Force in 1964, and moved residence to Winnipeg, where he married and had his beloved and only son Paul (predeceased January 8, 2011).
Besides his son, Al's career in the military was his proudest accomplishment. Al served for 33 years in the Military and then served as a Civilian for the Military for the remaining 18 years. Throughout most of his career, he served as a Physical Education and Recreation Instructor. In 1997, he went on to serve as the Fitness and Sports Director for the Personnel Support Programs.
One of his greatest achievements in his career was being the first Canadian inducted into the SHAPE Belgium's International Basketball Hall of Fame.
Al always spoke fondly of his 386 international flights to destinations all over the world, of which two of his favourite places were Belgium for it's good times, and Scotland for it's beauty.
After his retirement at the age of 70, Al's favourite pastimes were spending time with his lifelong friends, cooking, sharing old stories, camping and fishing in the Whiteshell, going to the racetrack to bet on the ponies and watching all NBA and NFL games to track his progress on his pool picks.
He will be truly missed by his family and friends. His kindness and warmth will never be forgotten.
We would like to personally thank the staff at Health Sciences Centre SICU for their wonderful care of Al.
In lieu of flowers, donations should be made to CancerCare Manitoba.
A small service will be held with close friends and family in Sioux Lookout in summer of 2022. Make a donation to