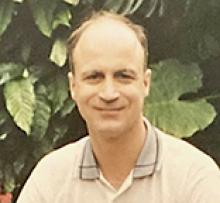 It is with deep sorrow and much love that we mourn the passing of David, on Tuesday, September 7, 2021, at the age of 62 years.
He will be lovingly remembered by his daughter Jasmine, wife Jina, ex-partner Lorraine, brothers, Rodney, Randy, Douglas (Lana), Terry (June), Timothy (Connie); sisters, Shann, Shari (Jean Paul); as well as nieces and nephews and numerous other family and friends.
He was predeceased by his parents, Henry and Marjorie, brothers, Gregory and Gerard, sister-in-law Nena, and brother-in-law Bill.
David was born in Lestock, Saskatchewan. Lived in Quinton with his family and onward to Winnipeg in 1970. David attended high school at Daniel McIntyre Collegiate Institute, where he discovered a passion for performance. He loved art, philosophy, and music. He played acoustic guitar and played in a band during these years. He also played football and was the quarterback for the high school team.
He had many careers throughout his life. He worked as a district manager at the Sun, he was a nurse and a stock promoter. David also taught English in Busan, Korea for many years, and there he met his wife Jina. They married in 2009, in Vancouver, BC, and settled there.
David put his family first, lending an ear and always willing to help, attentive to the needs of his family. David was a social person, who had a great sense of humour, and loved to laugh and clown around. He was always quick with a joke or story to brighten someone's day. One of his pleasures was walking to the community garden to look after his vegetables in the afternoon. He also enjoyed watching hockey games.
David loved his family and friends and had special bonds with his daughter, wife, and mother. He was generous and showered his family with gifts and flowers. He enjoyed his family gatherings in Vancouver where they played crib, as well as time spent with Kathleen and Bleu.
David was a spiritual person, although raised Catholic, he was drawn to other faiths and beliefs. He was an avid reader of the same.
You're gone too soon...
Your memory and spirit will stay with us in our hearts forever. We pray that your soul finds everlasting peace and eternal love.
Cremation has taken place and a private gathering will be held on Thursday, September 16, 2021 at 1:00 p.m. at Neil Bardal Funeral Centre, 3030 Notre Dame Avenue, Winnipeg, MB. The service will be live-streamed and available to view on David's obituary page at www.neilbardalinc.com. It will remain available on the website to watch at a later date.

"Strong like a diamond, a shining star above
Courage of a lion, with kindness and love
Your spirit in our hearts will sustain
Until we journey to that peaceful shore
and we meet again"