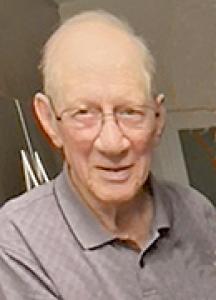 LONSDALE, William (Bill) Gerald Arthur, December 5, 1935 – September 15, 2021. It is with great sadness, we announce the peaceful passing of Bill on September 15, 2021; loving husband and father. Bill was born in the Municipality of Woodsworth to Henry and Edna (Corney) Lonsdale. He grew up going to school in Kenton, highschool in Hamiota, and working on the family farm in the Kenton area. As a young man, Bill worked many jobs, but began his career working for Anglo Oil in Hamiota and later moved to Boissevain, where he met Carol Ann Zeiler. They married April 23, 1960 and son Wade was born (1961). They moved to Austin where daughter Joan was born (1963). Bill secured a job with the provincial government, the Municipal Assessment Branch, which took them to Dauphin and he later transferred to Minnedosa (1971) He retired from the Assessment Branch in 1993. Bill was an avid sportsman enjoying baseball, golf, hockey and curling. He also had a passion for coaching both baseball and hockey. Bill and Carol loved camping with their children and in retirement years, they could be found travelling to warm destinations during the cold winter months. Yet his strongest love was all his family and time with them. He and Carol spent many hours visiting and enjoying them whether it was helping farm, dancing the night away, or creating special memories. Many hours were spent playing cards with family and friends. Bill was known for "laying in the weeds" and would "set" his opponents with the blink of an eye and a straight face. Bill also had been known to help clean up a pool table or three. And in the last few years, he had become addicted …. to Sudoku. He had a strong love for music and would often be found singing and humming to his favorite songs. Bill was known for his quick wit, his infectious smile, his quiet nature, and his kind and compassionate spirit. Bill was preceded in death by his parents, Henry and Edna, his sister Frances and his brothers Phillip and George. He is lovingly remembered by his wife Carol, son Wade (Jan) Lonsdale and daughter Joan Johns (Rick Ponto), along with grandchildren Maggie (Shawn) Desrochers, Adam Lonsdale, Kristen (Matthias) Schubert and Karlie Martens (Jeremy Amos), great grandchildren Oliva and Aiden (Desrochers). He also leaves to mourn his sister Pauline Campbell, sister in law Lorraine (John) Decamps, Aunt Betty (Pat) Golding, along with numerous nieces, nephews and cousins. A grave side service was held September 22, 2021 at Minnedosa Cemetry.