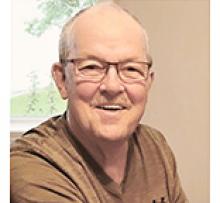 Gary passed away on September 13, 2021, at the Health Centre in Boissevain, Manitoba.
He is lovingly remembered and sorely missed by his wife Carmel, daughter Sara, son-in-law Rennen, grandsons, Keiman and Lennon.
Gary was predeceased by his parents Henry and Marguerite Olson, brother John, sister Emma, and sister Carol. He is survived by his brother James (Jean), brother Ron (Donna), brother Reg (Shirley), twin sister Anne (Joe), many nieces and nephews and great-nieces and nephews.
Gary was born in Crystal City, Manitoba on July 7, 1947. He grew up in Holmfied, Manitoba and went to high school in Cartwright and Killarney where his first job was in the clothing store. Following high school, Gary worked in the bank for a few years and was posted in Thunder Bay and Sioux Lookout, Ontario. He enrolled in Marvel Beauty School in Winnipeg in 1969 and graduated in May of 1970. Gary returned to Sioux Lookout and entered into a hairdressing and clothing business partnership.
Gary met Carmel in Sioux Lookout and they married on March 18, 1978. He became the proud father of Sara on January 12, 1980 and often took her for walks to see the ladies at the hairdressing shop. They relocated to Killarney in May of 1980. While in Killarney, Gary spent countless hours compiling the history of his beloved hometown of Holmfield and in 1982, his book "By the Old Mill Stream", (A History of the Village of Holmfield & District) was published.
The family moved to Deloraine in the spring of 1984. Gary continued with the hairdressing business, being well known for his skill and witty remarks. One of his customers always said that Gary had the only shop where you paid $5 for a haircut and drank $20 worth of rum.
He was involved with the Lions Club, United Church choir, Chamber of Commerce, and Southwest Singers. Gary organized many events and was awarded the Deloraine Chamber of Commerce "Special Citizen's Award" in 1995. He loved to sing and entered into local music festivals, winning the rose bowl in the last festival that was ever held in Killarney. He and Sara also sang together in the "family" category in the Deloraine festival. Shortly before moving to Brandon, he initiated the "Flying the Flags of the World" project in Deloraine, which still exists today.
The family moved to Brandon in 1996, where Gary joined Rana-Medical as a Home Oxygen Technician. The staff there remember Gary as the "party planner". He had an excellent rapport with the elderly and after retiring from Rana, he did hair in the personal care homes in Deloraine for a few years, singing to the clients as he completed their hairdos.
Gary and Carmel retired to Lake Metigoshe in 2012 and continued to live there, where he fussed about the appearance of the yard and tried his hand at growing vegetables.
Some of Gary's favorite times were travelling with the family, decorating for Christmas, organizing events, reminiscing with his siblings, and spending time with his grandson Keiman and ten years later with grandson Lennon. He was an avid reader and enjoyed entertaining his Facebook "friends" with his posts.
In accordance with Gary's wishes, cremation has taken place and burial in the Deloraine-Winchester cemetery will be at a later date.