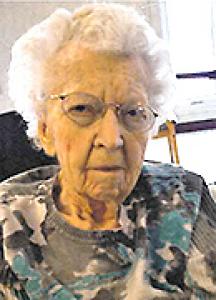 ROZAK, Pearl (1917-2021) passed away peacefully at the age of 103 at Hillcrest Personal Care Palliative unit in Brandon, MB on October 4, 2021 just 13 days short of her 104th birthday. Pearl was born in the Drifting River Municipality of Ethelbert, MB on October 17, 1917 to Nellie and Joseph Kamika. She was one of seven siblings. She attended Duck Hills school until grade 8 and then worked in Gilbert Plains where she met her husband Wilfred. They were married on February 12, 1940 and had two daughters. They farmed in the Gilbert Plains area. After selling the farm in 1947, they moved to Lethbridge, AB for one year and then to Ashville, MB where they operated a successful Esso Service Station and a Massey Ferguson dealership with Wilfred's brother Michael. After Wilfred deceased, Pearl moved to Dauphin alone, she lived there for 24 years and then moved to Monterey Estates, Brandon in 2012 to be closer to her remaining daughter, Lorraine for a year and a half prior to residing at Hillcrest Personal Care Home. Pearl was predeceased by her parents, Joseph and Nellie Kanika in the 60s, her husband Wilfred in 1978 and her daughter Donna in 1982. She was also predeceased by her sibling. Pearl cherished her years of travelling, sewing, volunteer knitting, gardening and needle point. She took a great deal of pride in her handiwork, yard and garden. She had requested a funeral in Dauphin and to be laid to rest beside her husband and youngest daughter, however, due to COVID restrictions, Lorraine chose to have a graveside service at Riverside Cemetery in Dauphin on October 7, 2021. Pearl is survived by her eldest daughter, Lorraine of Brandon, a niece Sandra Jonasson (Len) of Guelph, ON, a nephew Glenn Rozak (Lois) from Dauphin, MB and a nephew David Rozak of Edmonton, AB. I would like to thank all those in attendance including my friend from Brandon, The Very Reverend Father Oleg Bodnarski , Sneath-Strilchuk Funeral Services and the staff of Hillcrest PCH and all the people who phoned and sent their condolences.