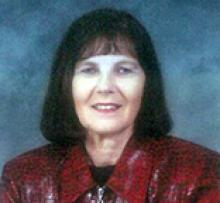 Jennie passed away peacefully, after a courageous battle with cancer, at the Gimli Community Health Centre on October 3, 2021. Our beloved mother and grandmother now joins her husband Joseph of nearly 59 years, in Heaven.
Jennie was born in Hamerlick (Poplarfield) to Fred and Annie Samorodny on March 12, 1943. She grew up on the family farm, attending Leeland School. The family relocated to Gimli where she graduated from high school.
Jennie met the love of her life at a wedding at Farmers Community Hall on August 13, 1960, becoming engaged on August 12, 1961. The lovebirds were married on August 11, 1962 at St. Benedict's Church in Camp Morton. Her memories of that day included how nicely the cars were decorated with white and red flowers. Although it poured that day, it did not put a damper on the start of their beautiful life together. After saying their vows, the sun came out! The dinner and reception were held at Farmers Community Hall where rain-soaked access had to be made by stepping on wooden soft drink boxes. As a joke, Mom said to Dad, "For our honeymoon, let's go to California." And that's exactly what they did! They went to Knott's Berry Farm, Pacific Ocean Park and touring to see the movie stars' homes. They even rang Danny Thomas' doorbell and he answered.
Mom worked at the Gimli Post office for 37 years, taking an early retirement due to health issues. Raised Catholic, she attended Mass faithfully on Saturday or Sunday. Mom was a member of The Catholic Women's League for 40 years.
As a family, we took many summer vacations to various popular tourist destinations. We had many adventures in our tent and travel trailer, including unplanned repairs. Mom was dedicated in helping Dad with yard work and processing the bounty of his garden. She was an avid reader and spent many hours reading books by her favourite authors.
Mom and Dad proudly attended all of their children's and grandchildren's graduations, as well as numerous activities and sporting events. Mom would never hesitate to put her life on hold to help with newborn grandchildren; with such a calming and patient gift to soothe even the most colicky baby.
They went on many bus tours to Las Vegas, Branson and Black Hills with friends Ed and Audrey. Mom loved going to Sand Hills Casino with friends Don and Diane, stopping for a picnic with more food than they could eat. High school friend Alice (Tkach) Cherniak and her husband Joe helped them share many birthdays and anniversaries; going out for dinner and late-night gambling at Club Regent and McPhillips Street Station.
She leaves behind daughters, Debbie (Mark) Dickson and Connie (Reid) Townsend; son Brad (Belinda); grandchildren, Jennica (Ethan), Ashleigh (Griffin) and Kayley; Katrina (Chris) and Gianna; Brendan and Kendall; step-grandson Ben (Josee) and step-great-grandsons, Bauer and Boden.
Mom will be dearly missed by her brother Peter (Mary), nieces, Sherry (Bruce) and Kim (Don), great-nephew Duncan; sister Mary (Wally) Komonko, nephew Kenny (Karen), great-nieces, Kirsten (Ryan) and Serena and nephew Darren, great-niece Cassidy. She will also be dearly missed by her brothers and sisters-in-law, Tony (Irene), Walter, Diane (Don), Julia (Bob) and Virginia.
She was predeceased by her parents, Fred and Annie; in-laws, Ludwig, Olga, Eleanor, Ernie and Elaine and niece Cheryl.
Cremation has taken place with a private service to follow. In lieu of flowers, donations can be made to St. Michaels Church parking lot fund (Box 266, Gimli), CancerCare Manitoba, Heart & Stroke Manitoba, or Crohn's and Colitis Canada.

Make a donation to