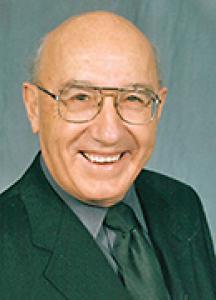 THIESSEN: Jacob "Larry", age 84 years, passed away on Tuesday, October 12, 2021 at the Brandon Regional Health Centre with his wife Joan, and family present for his last day here on earth. Larry was born in Rush Lake, SK on June 2, 1937. His parents, Jacob H. and Helen Thiessen, decided to move the family, consisting of Marianne, Larry, Leonard and Richard, to Gladstone where they welcomed two more daughters, Janice and Verna. Larry accepted His Lord and Savior at the age of 14 in a crusade in McGregor. He graduated from Steinbach Bible Institute in 1956. During his time at college he was involved in crusades and children's meetings. After school, Larry moved to Winnipeg and worked at different jobs. While in Winnipeg, he met and married his sweetheart, Joan on June 18, 1960. They were blessed with three beautiful daughters, Laura, Judi and Lee-Anne before being transferred to Brandon in 1967. In Brandon, Larry worked in Sales and service for NuWest Products, and in 1972, he purchased the business with Ernie Fishbook and Abe Heide. God blessed this business and used it for His honour and glory. In 1991, he sold the business to his partners. Larry then served in Public Relations at Briercrest Bible College for four wonderful years, traveling in ministry with students and fundraising. In 1995, Larry joined Janz Team Ministries full-time in evangelism and crusades, which took him across much of Canada and down to Texas and Mexico. He was joined by his cousin Marvin Thiessen in singing and leading choirs, both large and small. He loved to serve His Lord and Savior in music and ministry whenever the Lord called him. Larry was well-known for his love for God, his wife Joan, his family and music ministry. He was involved in his local church as Sunday School Superintendent, choir director, music leader, deacon and mentor. His rich booming voice was always recognizable in any sized group. Larry was also known for his love of life and love for others. He enjoyed telling jokes, playing games and laughing. Later in life, he loved to sit and read books to challenge his walk with the Lord. The family has many memories of getting up in the morning to find Dad already reading his Bible. Throughout his life, Larry was also involved in a variety of ministries outside the church. He loved preparing, sharing and singing the old hymns at Victoria Landing and Riverheights Terrace. In the summer he would be involved in Senior Camps at Turtle Mountain Bible Camp and Dallas Valley Bible Camp. Larry will be lovingly remembered by his wife Joan; children Laura (Bob) Cook, Judi Thiessen and Lee-Anne (Bill) Dennis; grandchildren Tybie Cook, Kaytlyn Cook (fiancé Ryan), Emily Cook, Kaylyn (Tony) Penner and Matthew Dennis (fiancée Kaeli); sister Janice Parke; and brothers Len (Joan) and Richard (Eleanor) and many nieces and nephews. Larry was predeceased by his parents Jacob H. and Helen Thiessen and sisters Marianne and Verna. A private Celebration of Larry's Life was held at Faith Fellowship Baptist Church and Larry was laid to rest at Austin Sommerfeld Cemetery. The family invites you to view the recording of the service on Larry's memorial page at www.memorieschapel.com. Donations in memory of Larry may be made to Turtle Mountain Bible Camp, Box 1198, Boissevain, MB R0K 0E0.