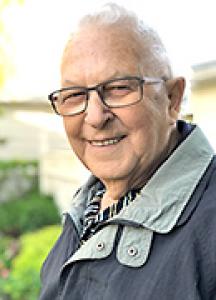 McCAUSLAND: Beverley Grant, age 88 years, passed away on Tuesday, October 19, 2021 at Brandon Regional Health Centre. Grant was the third son of Ernie and Marj-orie (Pettypiece) McCau-sland, born on June 9, 1933 at home, NW33-2-19, in the Fairburn district southeast of Boissevain, MB. He attended Fairburn School about one mile away for Grades 1-8, and Grade 9 correspondence. He went to school early in winter to light the fire. Keith and Earl, his two older brothers, were allured to off-farm jobs further afield so young Grant became involved in the farming operations. Fairland Farms was a diversified farm. His dad and he raised purebred Yorkshire swine and purebred Polled Herefords and grew crops. Following his parent's retirement Grant continued working the soil and raising swine and purebred and commercial cattle. He embraced new techniques and farming methods, which prompted him to build a fully automated feedlot. Grant was 4H minded like his parents. Upon his dad's retirement from the 4H Beef Club leadership, Grant and Bob Wright carried on the leadership for over 25 years. It was through a 4H award trip that he first met his wife, Sheila Fargey, of Belmont, MB. They became reacquainted while Grant was attending the Ag. Diploma Course at the UofM and Sheila was attending the Normal School in Tuxedo. They were married in 1958 and have two sons, Allan and Neil. Grant was not sports-minded but when his boys were involved he was there for them, especially with hockey, but also basketball. Both boys have acquired their dad's interest and skills in carpentry, plumbing and creative pursuits. Grant was community-minded and held positions on the Boissevain Chamber of Commerce, Community Living Manitoba (formerly CAMR), United Grain Growers Elevator and the Agricultural Society. He was a Trustee for the United Church and a director on the Manitoba Agricultural Credit Corporation. When the farm was sold in 1980, Grant and Sheila built a Nelson Home in Boissevain. Grant sold Nelson Homes for a period of time and then worked for Kimberley Clark. He renovated a couple of homes before deciding to move to Brandon soon after Sheila's retirement from teaching. Brandon was a good fit for Grant & Sheila, being close to their sons and their families. Many joyous occasions were had watching school functions and sports, and especially celebrating family events. Grant was very proud and grateful to have watched his grandchildren grow and mature. He enjoyed friendships with many neighbours in the Green Acres community. Grant's garage-turned-workshop was his year-round sanctuary where he created many beautiful pieces of furniture and other projects. He had saws and tools galore! He built a sunroom on the house, which was enjoyed for many years. Grant and Sheila found their spiritual home at Trinity United Church where Grant was able to use his talents to help upgrade and beautify the sanctuary and narthex. He was chair of the Property Committee for a number of years and took pride in keeping everything up-to-date and working well. The church family were a blessing during his journey with cancer. During their 25 plus years in Brandon, Grant and Sheila enjoyed many trips: Maui, Australia, New Zealand, Ireland and Scotland, an Alaskan Cruise and many US states, but after visiting all ten provinces Grant loved what Canada had to offer. Newfoundland, especially was a favourite. Grant's life will be forever cherished by his wife, Sheila; son Allan (Jana) Lauren and Rachel; son Neil (Karen) Mitchell and Lachlan and (Conor and Larissa); sisters-in-law Avis McCausland, Noreen Dom-eier, Donna Fargey, Phyllis Fargey; nieces and nephews; treasured friends. He was predeceased by his parents and brothers, brothers-in-law, and treasured friends. The Celebration of Grant's Life was held at Trinity United Church on Friday, October 29, 2021. A private interment will be held at Boissevain Cemetery at a later date. Donations in memory of Grant may be made to Trinity United Church, 1515 6th St., Brandon, MB R7A 6B3 or Cancer Research Society, PO Box 4613 Stn E., Ottawa, ON, K1S 1P7.