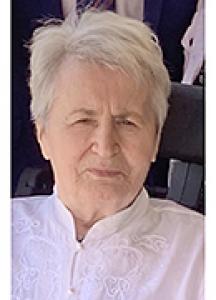 DUTCHYSHEN: Helen Rose Dutchyshen passed away peacefully with family by her side on Wednesday, November 25, 2021 at Fairview Personal Care Home at the age of 92 years. Helen was the eldest child (sisters, Jenny and Mary and twin brothers, Leonard and Edward) of Frank and Anastazia Yablonski. Helen was born in Sclater, MB on September 13, 1929. The family moved to Masefield, SK, where they lived until they moved to the Renwer, MB area in 1940. Helen married Nick Dutchyshen, whom she met while working at the Grange Cafe in Dauphin, on September 25, 1949 in Renwer, MB. They had their first child, Patricia, in 1951 in Dauphin. The family moved to Brandon in 1952, and they had two more children, Ronald in 1953 and Randy in 1961. Helen worked at Burgess Solo Store, Metropolitan Store, Barney's Motel and finally the Coca-Cola plant in Brandon. Helen was an active member of the Ukrainian Catholic Women's League at St. Mary's Ukrainian Catholic Church, where she loved the camaraderie with the ladies; she also enjoyed visiting with people in the hospital. Later in life she enjoyed 10 pin bowling, even represent-ing Thunderbird Bowl at a senior event in Salt Lake City, Utah. She also tried her hand at golfing. When Nick and Helen moved to Lion's Manor, Helen enjoyed morn-ing coffees with the ladies and participating in the "Kitchen Band" and choir. In 2013, Helen moved to Fairview Home and was extremely well looked after by the wonderful people there. Helen was pre-deceased by her husband Nick in 2011; parents Frank in 1993 and Anastazia in 1994; brother Leonard in 1997; sister Mary in 2020; brother-in-law Brownie in 2021; nephew Larry in 2004 and nephew Cristopher in 2015. Helen is survived by daughter Patricia (Eugene); sons, Ron (Kate) and Randy; grandchildren Michelle, Terry (Cathy), Jeanette, Angela (Tyler), Sara (Bryan), Matthew (Kelsey), Cory (Janaica) and Aaron; great-grandchildren Tripp and Erica; sister Jenny (Tad) and brother Edward; and many nieces and nephews. Prayers were said at Memories Chapel on Wednesday, December 1, 2021. The Divine Liturgy was celebrated at St. Mary's Ukrainian Catholic Church on Thursday, December 2, 2021 with Rev. Fr. Yaroslav Strukhlyak as Celebrant. Pallbearers were Michelle Dutchyshen, Tripp Mielke, Sara Dutchyshen, Matthew Dutchyshen, Jeanette Kachkowski and Bryan McDougald. Eulogy was read by Randy Dutchyshen. Both services are available to view on Helen's memorial page at www.memorieschapel.com. The family would like to thank the staff at Fairview Home for the excellent care and compassion they extended to mom while she resided there. Donations in memory of Helen may be made to any Manitoba Mental Health charity.