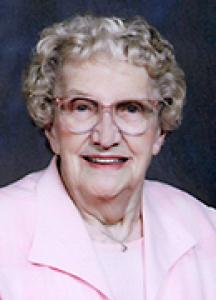 BOSMAN: Peacefully at Hillcrest Place in Brandon, Mary Bosman passed away on Thursday, November 25, 2021, at the age of 92 years. Mary Bosman (nee Wiens) was born in McAuley, Manitoba on February 18, 1929 to a Russian Immigrant family. Mary was the middle child and only daughter with three older and three younger brothers. Growing up on the family farm laid the foundation for a strong work ethic and strong family ties. Mary developed many useful life skills such as cooking, sewing and gardening, as well as outside farming chores. Mary's responsibility was the team of horses. Mary developed a very strong religious conviction and her faith carried her through many difficult times. Mary met Russell while he was working for CP Rail. Mary would board the train every Saturday morning to make the trip from Brandon, where she worked as a telephone operator, to her home farm at McAuley to help with farm work and other tasks. The first time Russell saw her, she was wearing a beautiful, long pink dress that she had sewn for herself. In Russell's words "She was just outstanding in her pink dress", and that's where it began. Mary and Russell married and had three children: Peggy, Susan, and Daniel. Mary worked for over 30 years at the Brandon General Hospital as a switchboard operator. She enjoyed greeting people and formed deep friendships with her coworkers. Mary was very community minded and spent a lot of time doing meaningful volunteer work. In the early years, Mary volunteered as a Brownie Leader, Scout Leader, and baseball coach. Later, Mary was involved in ITC, UCW, and Seniors for Seniors, where she took countless bus trips and developed many friendships. She devoted time to Central United Church, CNIB, the Brandon Festival of the Arts, Daly House Museum, Christmas Cheer, visiting in senior homes, and providing rides to church for those unable to drive, just to name a few. Mary had many creative talents as well. She was an avid quilter and knitter and her family was of great fortune to be on the receiving end of her beautiful projects. She also was an exceptional cook and baker. Anything Mary presented to the table was always prepared with great care and she put on many exquisite feasts. Music and singing were part of Mary's greatest enjoyments as she sang with the Church Choir and the Songbirds. As if that wasn't enough, Mary had a passion for golf and took swimming lessons in her forties and enjoyed swimming at the YMCA and Sportsplex. She loved skating, curling and cross-country skiing with her girls. She was also game to try downhill skiing for the first time in her 70s, but we persuaded her otherwise! Her family time at the cabins at Sandy Lake and later Clear Lake, was time she treasured. One of Mary's most endearing traits was her genuine love for children. Her eyes lit up whenever a child was nearby. Spending time with her children and grandchildren was mom's greatest joy. Mary was a faithful and enthusiastic spectator at her grandchildren's activities, including horse shows, basketball and hockey games to name a few. No matter how difficult or arduous the task, she faced it with courage. She was always ready for adventure, whether it be a road trip to visit family or sharing a simple cup of tea, Mary was up for it. One of her close friends said she lived a good life. There was much deeper meaning to that statement; her life was of goodness. She was JUST GOOD. Plain and simple. Mary is survived by her husband Russell Bosman; children Peggy (Dwight) Edwards, Susan (Robbie) Hallgrimson, and Daniel (Sheila) Bosman; grandchildren, Lindsay Edwards (Trevor Dickie), Brooke Edwards (Drake Watson), Travis Hallgrimson (Janet), Derek Hallgrimson (Alyssa Barbero), Nicholas Bosman and Priya Bosman; and great-grandchildren Henrik and Jacob Hallgrimson. There are so many people to thank; Mom received wonderful care at Hillcrest Place, and the staff quickly became like a second family. The family invites you to view the recording of the Celebration of Mary's Life by visiting her memorial page at www.memorieschapel.comIn lieu of flowers, donations in memory of Mary may be made to the Alzheimer Society of Manitoba, Unit 4B, 457 – 9th Street, Brandon, MB R7A 1K2 or Central United Church, 327 – 8th Street, Brandon, MB R7A 3X5.