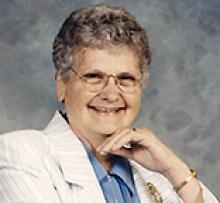 Shirley Nazarko of Calgary, AB, passed away peacefully in her sleep on Friday, December 31, 2021, at the age of 93 years.
Shirley was born and raised in Portage la Prairie, MB on October 15, 1928, to Albert and Rosa White and was the youngest of thirteen children. She married Adam Nazarko in 1950 and together, raised two beautiful daughters. They lived in Winnipeg, MB until Adam passed away in 1993 at which time Shirley moved to Calgary to take up residence in Monterey Park where she made many new friends.
Shirley is survived by her daughter Shawn (Rick) Bucci of Plaster Rock, NB; grandchildren, Jason Bucci (Alysha) of Whitecourt, AB, Melanie Mitchell of Calgary, AB, Danielle Sjoberg of Calgary, AB, and Dustin LaPointe of Guelph, ON; great-grandchildren, Adrianna Mitchell, James Mitchell, Madilynn Sjoberg, Abbygail Sjoberg, Everleigh Lapointe, Liam Lapointe, Sean Bucci and Payton Bucci, as well as many nieces and nephews. She was predeceased by her husband Adam (Ed) in 1993, and daughter Debby LaPointe in 2012.
Funeral Mass will be celebrated at St. Thomas More Catholic Church (15 Templebow Road N.E., Calgary, AB) on Friday, January 7, 2021 at 1:00 p.m. Graveside Service to follow at Mountain View Memorial Gardens. Condolences, memories, and photos may be shared and viewed here.
In living memory of Shirley Nazarko, a tree will be planted in the Ann & Sandy Cross Conservation Area by McInnis & Holloway Funeral Homes, Eastside, 5388 Memorial Drive NE, Calgary, AB T2A 3V9, Telephone: 403-248-8585.

You may wish to email your family and
friends to let them know that the above
obituary may be viewed online at:
www.mcinnisandholloway.com