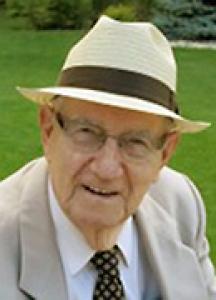 VICKERS, Ivan formerly of Pierson, passed away at St. Joseph Hospital, Estevan on December 27, 2021 at the age of 93. He was predeceased by his wife Ellen, daughter Donna Gould, son-in-law Terry Judd, two grandsons Trent Gould and Curtis Schoonbaert, parents Christopher and Jeanetta (Parsonage) Vickers, two sisters Betty Nathu and Janet Vickers, also brother- in- law Irv Crawford. Ivan is survived by six children: Helen (Rick) Schoonbaert of Deloraine, Grace Judd (Delnor Davies) of Melita, Joyce (Grant) Philip of Tilston, Kay (Michael) Herbert of Pierson, Sylvia (Cam) Sinclair of Drumheller and Grant (Leann) Vickers of Pierson, twenty grandchildren and twenty-nine great-grandchildren, sister Madeline Crawford of Winnipeg and brother-in-law Ken Nathu of Winnipeg. Ivan was born March 28,1928 in Baldur, Manitoba. While growing up he took part in hardball, curling and hockey. His interest in these sports remained throughout his life. Ivan moved to Pierson as an employee of the Royal Bank of Canada. He married Ellen Craven of Pierson and they raised seven children. Ivan left the bank and became Secretary Treasurer for the Municipality of Edward. This covered a twenty-four year period during which he purchased a license and insurance agency. Ivan's duties expanded to being Secretary Treasurer for Edward School District and Arthur - Edward Weed Control District. Later on Ivan was hired as Secretary Treasurer for the Antler River School Division #43 and also carried out this job from the Edward Municipal office. Ivan eventually resigned from the municipality and travelled daily to Melita as Secretary Treasurer for the Antler River School Division until retirement. Ivan's interests expanded over the years to camping, trees, gardening, golfing, hunting, and fishing. Community was always a major part of Ivan's life. He coached minor baseball and hockey, held executive positions in the Curling Club, Skating Rink, Hall Committee and Lions Cub. Ivan had several different dogs throughout his lifetime and was most fond of the Labs. He took his family and his dog on many summer vacations; tenting at first and later renting a cabin at many different favourite spots. As the family started to leave home Ivan and Ellen purchased a trailer and enjoyed camping throughout retirement. Ivan took a great deal of interest and pride in all his children, grandchildren, and great-grandchildren's lives. He attended many of their sporting activities, school events and was very proud of all their accomplishments. Ivan's love for his family and genuine interest in their lives will be cherished and his memory will be forever in their hearts. A celebration of Ivan's life will be held in 2022, date, time and location will be posted when available. Donations may be directed to the Pierson Cemetery Fund, Box 100 Pierson MB R0M1S0 or the Pierson United Church Memorial Fund, Box 281 Pierson MB R0M1S0 and tributes may be directed to www.redpathfuneralhome.com