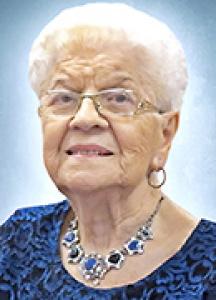 GAREAU: Mildred Gareau (née Emilia Hedwig Gilarski) passed away peacefully at Fairview Personal Care Home on Wednesday, December 22, 2021. Mom was born in Brandon, Manitoba on July 28, 1924, the ninth of ten children of John and Eleanora (Kolodziyezyk) Gilarski. Mom and her siblings grew up in the little white house at 62 - 7th St. North in the area of Brandon known as the "flats". Mom attended David Livingston School, Central School and St. Augustine's School before taking three years of high school at St. Michael's Academy. When her schooling ended mom joined the work force and held a variety of jobs in Brandon. In 1947, Mom went to get a loaf of bread at Pete's Grocery and Confectionary on 8th St. North, just down the lane and around the corner from home and was introduced to a relative of the owners. His name was René and the rest is history. After a brief courtship mom and dad were married on September 25, 1948. Mom was a woman of very strong faith and attended church on a regular basis whether it was St. Hedwig's Roman Catholic Church where she had been baptized and later married or St. Augustine's Roman Catholic Church which she attended from 1960 until she was no longer able to because of Covid-19. It was her connection to St. Augustine's that led mom to start working again. When she was in her 60's mom became the Lunch Hour Supervisor at St. Augustine's School. She loved her work with the children and was proud of the fact that she could do such an important job at her age. And the children loved her. In later years, she took great pride and joy in telling us that she was now supervising children of her former students. Mom was also involved in volunteering with the church; singing in the choir, visiting the sick and assisting at services at the hospital and Fairview. Mom loved having a house full of family, especially at the holidays and at Christmas most of all. She never sat down except to open her gifts. She performed miracles in her small kitchen; producing feasts that included the best pierogies, cabbage rolls and shortbreads anywhere. And who can forget the fish with its secret coating that was only ever served on Christmas Eve! After dad passed away in 1995, mom stayed in the family home until the stairs became too much for her and she moved into her apartment in 2010. After dad was gone her good friend Marlene convinced mom to go to a dance for singles and that was the beginning of regular Saturday night dances. Mom loved the dances and looked forward to being able to dress up in her newest outfit and put on her matching jewelry. She always dressed up, even if she was just spending the day alone in her apartment. Her closet was full of the latest purchases from Cleo's. Unfortunately, a fall in 2017 forced mom to hang up her dancing shoes at the age of 93. It also forced her to give up her apartment and take up residence in Fairview. After a period of adjustment mom grew to enjoy life at Fairview and always spoke highly of the staff on the 3rd Floor. Mildred's family would like to sincerely thank the staff on the 3rd floor at Fairview for all their care and support during her 4+ years residing there. Mom was pre-deceased by her husband René Sr., her parents John and Eleanora, and her siblings and their spouses; Frank (Rose), Anne (John) Baniecki, John (Lil), Gus (Joey), Walter (Elenore), Jean (Bill) Hutchinson, Mary (Al) Grzesiak, Helen (Joseph) Medwecki and Charles (Julie). She was also predeceased by her close friend and dance partner Harvey Henderson. Mom is survived by her children: Sharon (Dave) Udell of North Rustico, PEI, Yvette (Dennis) Jahns of Rivers, MB. , René Jr. (Colleen) of Midland, ON., Ron (Judy) of Russell, MB., Royal (Dianne) of Brandon, MB., John (Sheila Reid) of Brandon, MB. and Jackie (Gord) Bjornsson of Sherwood Park, Alta. She is also survived by her grand-children: Joanna Udell, Christian Udell, Shawna Packo, Derek Jahns, Trevor Jahns, Adam Gareau, Nicole Gareau, Micheal Gareau, April Durksen, Mark Gareau, Aaron Gareau, Bradley Bjornsson, Stacey Bjornsson and her great-grandchildren; Zachary, Damian, Lily, Liam, Kristian, Shea, Miles, James, Nolan and Henry. Mom also leaves to mourn her passing her sister-in-law Ruth Gareau of Ottawa, ON, her dear friend and cruise-mate Marlene (Brechka) LeGal as well as numerous nieces and nephews both in Canada and the United States. A private family service and burial has taken place. There will be a Memorial Mass for mom at St. Augustine's Roman Catholic Church on July 28, 2022 at 11:00 a.m. In lieu of flowers, a donation in Mildred's name may be made to Fairview Personal Care Home, 1351-13th Street, Brandon, MB, R7A 4S6.