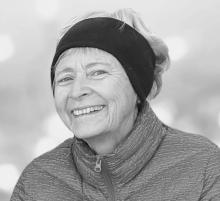 MAGUIRE (nee BERRY), Beryl Mae (Nov 23, 1950 (Flin Flon, MB) – Dec 30, 2021 (Calgary, AB)) passed away on Thursday, December 30, 2021, at the age of 71 years, due to complications from open-heart surgery. Beryl was born in Flin Flon, MB, to Gertrude and Harvey Berry on November 23, 1950. She graduated high school in Flin Flon at the age of 16 (because she skipped an elementary school grade). Beryl then attended the University of Manitoba where she received a Physiotherapy diploma at the age of 19 and began working as a physiotherapist. Beryl married Larry Maguire in 1971 at which time she began co-managing their farm near Elgin, MB. She continued working as a community physiotherapist until 1976. Beryl and Larry's children, Tim and Laura, were born in 1975 and 1978 respectively. Beryl was active in the surrounding communities including being a member of the Souris Valley School Board where she became the first female Chair of the school board. She successfully fought Hodgkin's Lymphoma in 1987. In 1991, after raising her children into their teenage years, Beryl returned to work as a physiotherapist. Beryl continued working and volunteering after she and Larry retired from the farm and moved to Virden in 2003. She was an especially active volunteer for Cancer causes, including being a volunteer for several years for both Relay for Life and Cancer Care in Winnipeg, which included driving people for cancer treatments. In 2015 Beryl moved to Calgary to be close to her children and family. In addition to volunteering, Beryl was always an avid gardener and active in sports such as curling and golf. Upon moving to Calgary, she immediately immersed herself in these and other sports and activities; volunteered in her new community, became a part of the Red Deer Lake United church near Calgary, and faithfully attended the activities of her grandchildren and great-nieces. All who knew Beryl were aware that she wore her moral compass on her sleeve; she was a passionate advocate for many social causes such as gender equality, the rights of people with disabilities, Indigenous rights, and the right for people to die with dignity on their own terms. She will be greatly missed by family and the many lives that she touched. Beryl is survived by her son Tim Maguire (Barbie); grandchildren, Colton, Ashton, Emily, and Shamus; daughter Laura Harrington (Devin); grandchildren, Oscar, Henry, and Ivy. She is also survived by her former spouse Larry Maguire; sisters, Noreen Maguire (David), and Bonnie Berry (Randy); as well as nieces and nephews, Wade Bo-Maguire (Dinh), Shane Maguire (Gayle), Paul Marchinko (Lily), and Elan Marchinko (Jeff); and great-nieces and great-nephews. A Memorial Service will be held at the Red Deer Lake United Church located just outside the Southwest corner of Calgary in spring or summer of 2022 at a date and time to be determined. Condolences, memories, and photos may be shared and viewed at www.McInnisandHolloway.com. If friends so desire, memorial tributes may be made directly to two of Beryl's favorite charities, the Terry Fox Foundation, 16A, 6120 – 2nd Street S.E., Calgary, AB T2H 2L8 Telephone: (403) 212-1336, terryfox.org/donate or to the Rick Hansen Foundation, https://www.rickhansen.com/get-involved/donate. In living memory of Beryl Maguire, a tree will be planted in the Ann & Sandy Cross Conservation Area by McInnis & Holloway Funeral Homes, Park Memorial, 5008 Elbow Drive SW, Calgary, AB T2S 2L5, Telephone: 403-243-8200.