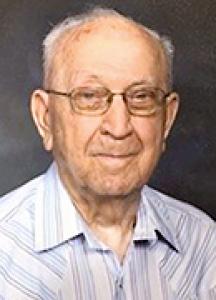 NEETS, Daniel David of Brandon, passed away July 25, 2021 at the age of 97 years. Dan was born in Morris, MB on June 2, 1924 to Safren and Matilda (Werner) Neetz. At the age of 5, 1929, the family moved to Chilliwack, BC where they farmed, lived off the land, grew their own fruits and vegetables, raised cattle supplying milk and cream. Money was not fluid but the family of nine survived. Dan enlisted in the Royal Canadian Air Force December 19, 1942 and although he volunteered, he never fought abroad due to his inoculations which sent him into Shaughnessy Military Hospital for a few months. He attended Vancouver tech to be trained in metallurgy. On completion, he took the train to Toronto, on to St. Thomas, Gimli and Comox. He was discharged at Boundary Bay in Sept. of 1945 and was retained on RCAF Reserve Status. In 1946, he met and married Clara Munn in Vancouver and together they settled near Nesbitt, MB, farming with Clara's parents, Hugh and Mary Munn. As farming wasn't for Dan, they moved the house that Grandpa Hugh and Dan had built, into Brandon to 1023-5th Street. Dan became a meat cutter for Safeway and when he was offered an opportunity to run a business of his own, our family moved to Foam Lake, Saskatchewan in 1952 where Dan, together with Macleods, started a business. When Macleods wouldn't sell him the ownership rights, we moved to McCreary in 1957, where he was able to own his own Macleods Store. His comment in the book Mary gave him -which he faithfully filled out and we are so thankful for: about being a businessman: "I made a point of memorizing my customer's first names. It turned out to be very effective in customer relations." Dan moved the family to 2318 Richmond Avenue in Brandon in 1964, hired a manager for the store and started working for the government in the sales tax division. He was fair with people, never to hear a negative comment on how he treated his customers. Dan and Clara enjoyed some travelling in their retirement with bus tours and trips abroad. They moved into Village Green in 2011, a good move for them. Dan loved to play bridge and had good friends who drove him to and from Prairie Oasis for which he was most appreciative. He was very disappointed when his eyes would no longer allow him to play this favourite game. He was a member of the Royal Canadian Legion for 71 years, belonged to the Masonic Lodge, joining in 1953, and was a member of the AOTS at Trinity United Church and often spoke of the Pit Barbecues. Dan is survived by his two daughters, Mary Chambers (Bert and Anne) and Heather Nicol (Terry), six grandchildren and their partners, Curtis (Angie) Chambers, Jason (Beckie) Chambers, Pam Chambers (Rob Green), Teresa Myers (Scott), Cyndi Byrd (Albert Melin), and Kurt (Kerri) Nicol. 17 great-grandchildren, Devon (Niki) Wood, Amanda (Scott) McDougald, Tyson Chambers, Aelan and Ethan Chambers, Jayden and Mason Green, Kerry and Dylan Myers, Shelayne (Riley) Balcaen, Kailey, Trace, Luke Byrd, Reid and Kale Nicol, and five great- great-grandchildren, Savannah and Charlotte Wood, Mason McDougald, and Harper and Macy Balcaen. He was predeceased by his father Safren, mother Matilda, step-mother Martha, wife, Clara, brother-in-law Dalton, and all four of his brothers: Milton, Lorne, Ezra and Bill, two sisters: Gertrude and Esther and all of their spouses. Dan was the youngest and the last survivor of his siblings. A memorial will be held at Central United Church, 327-8th Street in Brandon, MB on January 24, 2022 at 11:00 am, which will be live-streamed and viewed on YouTube. Proof of vaccination and wearing of masks is mandatory as well as social distancing. In keeping with Dan's wishes, cremation has taken place with a graveside service to be held at a later date. No flowers please. If you wish to make a donation in his name, it could be to: Diabetes or CNIB.