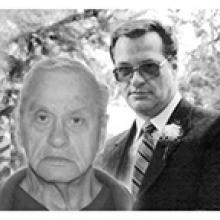 Malcolm "Mac" Jamieson passed away on Thursday, January 27, 2022, at the age of 83 years, after being diagnosed with Peritoneal Mesothelioma due to many years as a sheet metal worker.
He was born in Winnipeg, Manitoba and lived there for over 40 years.
Mac spent some time working in Churchill, Manitoba where he said he learned to cook. He loved to hunt fish and spend time with his cousin Bob Thruthwaite.
After moving to Calgary, he met his first wife Joyce. Unfortunately, they had a very short time together as she passed from cancer. He had many loving memories of his time together.
When Mac eventually remarried it was to Val Bogen (originally from Germany). He also lost her to cancer. He travelled with her to Germany and fell in love with Berlin.
Mac loved to cook and bake and was well known for his abilities. He loved to share his accomplishments with numerous friends.
Mac had numerous friends who helped him before his decision to move to Dulcina Hospice in Calgary. Kevin Pollard and Pam, Fatma and Yaz, as well as his morning McDonalds friends, Ernie and Phil to name a few.
He is survived by his sister Irene; his niece Sharon (Rudy); Sharon's children and grandchildren; and his nephew Craig.
Malcolm was predeceased by his mother, Violet Jamieson and his father, Wilfred Jamieson; his wives Joyce and Val; and his brother-in-law Stan Cox.
A further date is pending in the spring for a Celebration of Life.
Condolences, memories, and photos may be shared and viewed at www.McInnisandHolloway.com.
We would like to thank his doctor Annalee Coakley for her special care and friendship during his illness. We would also like to thank the doctor and all the staff at the Dulcina Hospice who looked after him during his illness. Your care and consideration for Mac was apparent to all.
If friends so desire memorial tributes may be made to Dulcina Hospice in Calgary, Alberta.
In living memory of Malcolm Jamieson, a tree will be planted in the Ann & Sandy Cross Conservation Area by McInnis & Holloway Funeral Homes, Eastside, 5388 Memorial Drive NE, Calgary, AB T2A 3V9, Telephone: 403-248-8585.