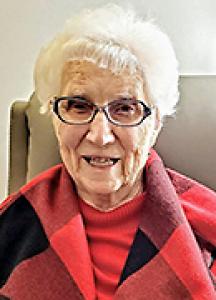 THOMAS, Anita Violet (Atkinson) passed away peacefully with family surrounding her on March 2, 2022. She was born December 29, 1923, in the White-water District, to Harrel and Elizabeth (Troop) Atkinson. Anita was the 5th child, and the first daughter to join the family. When Anita was still an infant, they moved to the Melgund District. She went to school in Melgund and Hartney, finishing Grade 12 by correspondence as this grade was not available in Hartney. After graduating she went to Winnipeg where she attended the Winnipeg Normal School and received her Teaching Certificate. She taught in Melgund, Grand Bend, Chelsey and Griswold before getting married. Anita enjoyed traveling and made trips to visit her father's family in Nova Scotia and California. In 1949 Anita married Ross Thomas from Melgund, MB. They had four children. Eric, Chris, David and Cathy. They lived and farmed a mile north of the Thomas home farm until 1961 when they moved into Lauder to be closer to their growing herd of purebred polled shorthorn cattle. This herd went from 15 cows to over 400 head. In 1968 Ross's parents, Chris and Lois, retired into Hartney and so Anita and Ross moved onto the original Thomas farm. NW 13 - 5 - 24. They lived on the farm until 1982 when they retired into Hartney. Anita was very competitive and loved sports. She loved watching the Lauder Parklanes play and all local baseball teams. Curling and football were also her favourite sports. She was very involved in both Lauder and Hartney United Churches, UCW, Hospital Aide, and Eastern Star. Ross and Anita traveled to Mexico, New Zealand, Australia, France, Germany, Switzerland on cattle buying trips to bring new breeds to North America. Their favourite time of retirement was being SnowBirds. They went down to Apache Junction, AZ for 10 years. They also went on many bus tours. Anita was predeceased by her husband Ross, son Eric (father to Wendy and Vicky), daughter-in-law Sarah (married to Chris), grandson Jimmy (son of David and Peggy), parents Harrel and Elizabeth, brothers Charles, Ronald, Merle, Kenneth and sister Phylis. She leaves behind sons Chris and David (Peggy), daughter Cathy (Gerry), ten grandchildren (Wendy, Vicky, Dawn, Christopher, Donna, Jason, Jennifer, Desiree, Danielle and Kyle), 21 great-grandchildren and two great-great-grandchildren. Anita had a wonderful, full life. She was always interested in everything in the community and in sports and politics around the world. She was so afraid we'd forget how things were this past 100yrs. She would tell story after story and encourage us to write our own memoirs. Her Celebration of Life will be held at the Hartney Centennial Centre on Monday, May 2, 2022 at 2:00 p.m. The family would like to extend a huge thank you to the Hartney PCH for looking after Mom and making it her home these past 8yrs. She thought it was a pretty great place to live.

Messages of condolences
may be made at
www.kowalchuks.net