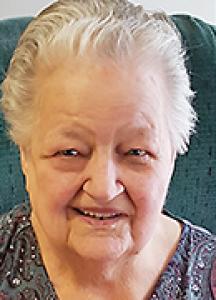 OSUDAR: Lois Jessie Osudar (nee Scharff) passed away on Thursday, April 28, 2022 at Rideau Park Personal Care Home. Born December 10, 1934 in Holland, MB, Lois completed grades 1-12 in Holland then attended Wheat City Business College. On June 25, 1955, Lois married Metro "Matt" Osudar in Holland, MB. Growing up, Lois spent her summers at the family cottage in Clear Lake, and once married enjoyed summers at their cottage in Grey Owl. After teaching school at Tomlin School District for a year, Lois held various jobs with the Federal Government, as an instructor for Defensive Driving for the Manitoba Safety Council, and finally with the Manitoba Heart and Stroke Foundation as the Executive Director before retiring after 22 years of service in 1992. Lois was very active with the East End Community Centre, Kiwanis Club, UCT and politics. She also spent time as a prayer warrior with the Salvation Army and was board member at Dinsdale Home for 22 years. Lois developed many close friendships through the Hutterite Colonies, including very special friends Sarah at the Spruce Woods Colony and Sarah Waldner of Blumenort Colony. Lois will be lovingly remembered by her son Richard (Loree) of Birtle, grandchildren Amber and Wade (Kristen) son Randall (Melody) of Brandon, grandchildren Ryan (Jordan), Brayden (Nicole), Courtney (Jason) and Justin (Tanya); daughter Debbie (Sam) of Brooks, AB, grandchildren Shealyn (Sean), Dehllon (Jessica) and Wendy; great-grandchildren Layton, Cody, Kisha, Kolson, Jaxsen, Blake, Maddie, Emma, Liam, Rogin, Luca and Navy; and her
sister Dianne (Keith) Laughland. She was pre-deceased by her husband Metro "Matt" Osudar, parents Mary "Marie" and William "Bill" Maynard Scharff, brother John Scharff and granddaughter Jayde. The family would like to thank the staff at Rideau Park Personal Care Home for their care and attention. A Graveside Service will take place at Brandon Cemetery at a later date. Donations in memory of Lois may be made to the Salvation Army, 9 Princess Avenue East, Brandon, MB R7A 1R8.