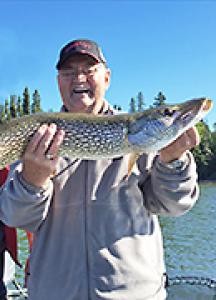 PENNER: John Dick Penner of Brandon, MB passed away at Fairview Home on Saturday, May 7, 2022. John was born August 20, 1933 in Radville, SK; he had a twin sister and was the youngest son in a family of 12 children. The Penner family moved from Saskatchewan to the family farm just east of Brandon when John was just 12 years old. With five older brothers doing most of the farm work, John was often delegated to help his mom in the garden. Every winter the Penner boys would play hockey on the rink they made in the yard. John completed his schooling at Brandon Collegiate, Rostern Junior College, Mennonite Bible College in Winnipeg and Musker Engineering Institute in Winnipeg. After taking a mechanics course at Musker Engineering, John worked as a mechanic at Reg Perrin's Garage and later in his own shop. If there was something to be fixed, John would figure out a way. Being a "people person" he loved connecting with others through the sale of Conklin Products. Farming was second nature to John including grain, hogs and cattle, later specializing in Simmental animals. John volunteered with Gideons International, distributing Bibles in elementary schools, businesses and hotels; John always had a small Gideon Bible in his pocket. He was also a Chaplain at Brandon Regional Health Centre and Brandon Correctional Centre, a board member of Youth For Christ and was very involved in church ministry, serving on the board and various committees, youth leaders and teaching Sunday School. John's lifelong goal was to share God's Word and His love to those around him. For several years John was involved with the Fellowship of Christian Farmers – Wordless Walking Stick Ministry at the Winter Fair. He also volunteered his time and equipment to harvest grain for the Canadian Food Grains Bank and was a founding member of Christian Heritage School in 1975. John's family was very important to him. He counted it a privilege to run the farm side by side with his son. His four granddaughters were extra special to him and he was able to develop a special relationship with the girls as they grew up on the same property as John and Mary lived. Once retired from his hectic farming lifestyle, John discovered new interests; he took up fishing and loved going up north on a five-day fishing trip with son Doug and grandson Thomas. When John and Mary moved to Monterey Estates, John turned his agricultural skills into a flourishing vegetable garden in the back yard, complete with an arbor of grapes. He also tried his hand at golf since they lived right next door to a golf course. John loved spending time at the family cabin at Minnedosa during the summer. At the spry age of 80+, John built himself a small workshop called "The Man Cave", where he practiced woodworking and intarsia. Frustrated with the jigsaw puzzles that Mary tried to get him to do, John turned to adult coloring books while watching sports or hunting and fishing shows. And John would never turn down an invitation to go to a Wheat King game. John is survived by his dear wife Mary; son Doug (Melissa); daughter Heather; four amazing granddaughters Brady (Richard Dempsey), Megan (Aaron Amstadt), Kelsey (Thomas Dunn) and Alexa (Pete Schmuland); great-grandchildren Ava, Lucas and Owen; one sister and two brothers. He was predeceased by five sisters and three brothers. The Funeral Service will be held at Richmond Park Mennonite Brethren, 1525 – 26th Street on Wednesday, May 18, 2022 at 10:00 a.m. Private interment will take place at a later date. Donations in memory of John may be made to Youth for Christ, #4, 1228 Rosser Avenue, Brandon, MB R7A 0L9 or Wordless Walking Stick Ministry, 12 Hermary Street, Red Deer, AB T4N 6E7.