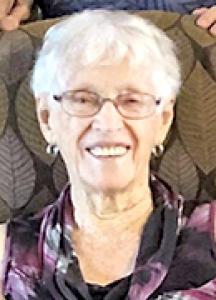 HEISE: Margaret (Marg) E. Heise of Hamiota, passed away on May 4, 2022, at Shoal Lake, Manitoba, at the age of 97. Marg was born on September 5, 1924, to Gladys (Hume) and Hartwell Doupe, of Crandall, Manitoba. Marg grew up on the family farm with older brother, Harold, and younger brothers, Ben, Ron, and Stan. She has many stories to tell of her childhood and the fun they had in spite of the fact it was the Depression Years. Her father bought her a piano, and started her lifelong music interest. She also played ball with the local Crandall girls' team. Marg's mother died quite young, age 51, and she cared for her mother at home until she died. She had been attending Brandon College, taking a BSc but she came home to care for her mom. Her mother, Gladys, made her husband promise to send her back to college and not keep her at home to care for the younger brothers. Marg went back to Brandon College, worked hard in class, did part-time work, graduated, and started her teaching career. Marg's teaching jobs included Elkhorn, Beulah, Isabella and in later years, Crandall, and Birtle Collegiate. She was well-respected as a high school math teacher, and her patience, and ability to explain math problems, as well as maintaining fair discipline, have been commented on by many students over the years. While teaching at Isabella School, where she was principal for a time, she met her future husband Dave Heise. Marg and Dave married in 1951, and remained partners in every sense of the word, until Dave's death in 2020. Only COVID rules separated them at the end. Marg looked after Dave as long as she was able to until his health declined to the point he needed personal care. They spent almost 70 years together. Marg and Dave started their married life on the farm north west of Isabella (the Marshall place). They had a mixed farm—grain farming with Dave's family, and milking cows and shipping cream. Their family soon expanded to include three children Sandra, Allan and Carolyn. During this time, Marg taught music lessons to many young people in the area. She went back teaching in 1964, to Crandall High School. No longer did she have time to teach piano. From Crandall school, she moved on to Birtle Collegiate and taught mainly math courses there until she retired in 1979. She also served in her community on church groups, teaching Explorers, and playing the organ in church. Many young married couples had her as their organist for weddings. On the farm, Marg had a big garden and shared in the farm duties—helping milk cows, driving grain truck, etc. In 1983 work began on a new home in the yard. They enjoyed this home for many years but eventually when the yard and garden duties became too much, they moved to a condo in Hamiota. They never lost track of their Isabella friends and always went back to fall suppers and community events. While in Hamiota, Marg became active on the executive of the golf club, and enjoyed playing cards, participating in shuffleboard games and visiting with new friends and neighbours. Golf was a favourite past-time for Marg and she played until she was 96. Over those years, Marg tried and accomplished many new things—dry-walling, painting, re-upholstering, sewing, knitting, ceramic painting, etc. She was always interested in gardening, and she and Dave worked on their yards continually. When she lived at Lilac residence, she shared her bountiful crop of tomatoes with other friends there. Marg was never scared to try new things. She used a computer for many years and then had an IPAD, and learned how to use it for communicating with family and friends, playing games, and doing her banking. This continued until she died. Marg was truly a lifelong learner. For approximately 30 years, Marg and Dave wintered in Pine to Palm in Weslaco, Texas. Here they enjoyed another community of friends, and shared many happy times, golfing, playing cards, and having happy hours. They also went to Osoyoos for a few years. Other trips were taken to New Zealand and Australia, Ireland, Hawaii, Alaska, and other points in Canada and the United States. Grandchildren played a large role in Marg's life, and she enjoyed five of them—Brian, Lyle, and Kerilee Armitage, and Tegan and Chelsea Somerville. Many sleep-overs, golf games, camping trips, card games, and family celebrations were enjoyed. Grandma taught her grandkids a great deal. She became known for making white cookies, butterscotch pudding, and cinnamon buns. Then along came the great-grandchildren and there are now ten of them—Claire, Logan, Evan, Cole (children of Brian and Candice) , Layne, Liberty, Lochlan Armitage (children of Lyle and Loni), and Carter, Addy, and Casey Fouillard (children of Kerilee and Dustin). Casey was born 11 days after Margaret died. She appreciated all the face-time visits, phone calls, cards, and visits with this next generation. Marg had a long, active life, and took her health seriously. She tried to follow a good diet and to stay active. Daily, she did exercises, and if she had a problem, she set out to resolve it with the help of physiotherapists, and/or doctors. Marg was predeceased by her husband Dave, parents Gladys and Hartwell Doupe brothers Harold (Joyce), Ben (Audrey), Ron, and Stan, brothers-in-law, Doug (Shirley), Art. She leaves to mourn her family Sandra (Don) Armitage, Allan Heise, Carolyn (Rob) Somerville, 5 grandchildren, 10 great-grandchildren, sisters-in-law Noraleen, and Vel, brothers-in law Lawrence (Lynn) Heise, John (Merle) Heise, sister-in-law Margaret L. Heise and many nieces, nephews, and other relatives and friends. Cremation has taken place. A service for Marg will be held in the Isabella Community Hall on July 2, 2022 at 2:00 PM. Interment will be at the Isabella Cemetery with lunch to follow at the Hall. Donations can be made to the Heart and Stroke Foundation, Hamiota Health Center, or charity of choice.